Hey everybody, welcome back to Collectors Corner! Every other week I’ll be bringing you a special article on the Nintendo consoles, merchandise and collectibles that I love. Ever since I was a kid, Nintendo’s held a special place in my heart, and has inspired me to collect and do research on the seemingly infinite amount of collectibles out there– I’m excited to share that passion with you all.

This week, we’re going to take a small step back from consoles once again, without leaving them completely. We’re focusing on the 3DS once again, but with a slight twist. One of my favorite things to come out of the New 3DS line was the inclusion of cover plates. Even though we here in the West didn’t have access to them at all during the first half year of their release, they were certainly a huge hit everywhere else around the globe. Everyone here at Nintendo Wire loves our standard size New 3DS systems because they fuel our addiction to cover plates. And for that reason, we’re featuring some of our favorite cover plates in this week’s Collectors Corner!

First up is my very favorite pair of cover plates released for the New 3DS, and perhaps the most popular set as well: the Boo plates. Featuring a simple design that matches the Bountiful Boos 3DS theme, these mischievous little ghosties are hiding another secret: they glow in the dark! The effect is stunning against the black background, and is a big part of the reason why these plates have become so popular. In fact, these were so limited and are so sought after that they go for upwards of $160 on Amazon right now.

Released in a bundle with a standard size New 3DS in February of 2016, these plates celebrated the 20th anniversary of the Pokémon series by featuring the original, official art of Charizard and Blastoise that adorned the boxes and cartridges of Pokémon Red & Blue. The art is astonishingly beautiful, even after 20 years. The Blastoise plates spend the most time on my New 3DS and it’s a real treat seeing that old art every time I go to play Pokémon Moon. Since they were only sold with the limited edition Pokémon Red and Blue New 3DS bundle, and for a very brief period of time on the official Nintendo Online Store, these plates are pretty pricey on their own, with each set selling for about $45 on eBay. 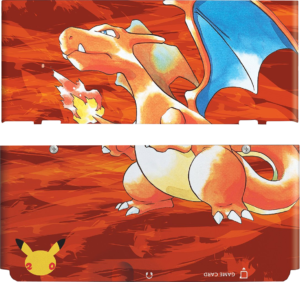 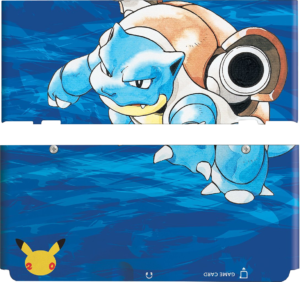 A homage to Nintendo’s playing card past, these breathtaking Hanafuda cover plates are a sight to behold. The shy Boo half is modeled after the full moon Hanafuda card, while the Piranha Plant half is modeled after the sake cup card, and the attention to detail makes this pair incredibly stylish, as well as a great conversation starter. Although I have yet to own any, these plates are some of my favorites I’ve come across. If you’d like to dress your New 3DS with this stylish set, you’re in luck! They’re currently available on Amazon for $42.

This gorgeous set of cover plates features the Mario collage design we’ve seen on several other sets– but the catch here is the wooden texture. Most of the internet is conflicted on whether it’s a wooden plate with plastic backing, or if it’s very convincing texture on a plastic plate, but after a lot of research (I don’t own the plates myself yet), I’m inclined to believe it’s wood paneling with a plastic base. I’m a sucker for all things wooden, so these plates are definitely a must on my wish list.

Another set of textured plates released with this same art are the Super Mario felt cover plates. Now, after a bit of research, I know that these plates are, in fact, covered in real felt. At first, this set would seem hard to keep in pristine condition, but owners of the plates swear they’re actually very easy to keep looking nice. Would you like to own these strangely textured, experimental cover plates? The wood plates start at $28 on Amazon, while the felt start at only $18.

Perhaps one of the most difficult to find, and one of the best looking sets of cover plates released, the DoCoMo Mario cover plates were only available from the Japanese mobile phone operator, DoCoMo. The set was available from the DoCoMo Premium Club bundled with a New 3DS that you could obtain by redeeming 20,000 points (roughly a $200 credit). Nintendo Wire’s Amiibo Jason managed to obtain a set of these cover plates last month, and the rest of us on the team are definitely jealous. The only set I was able to find on eBay during my research was going for $115, proving just how rare this design really is.

There’s another Collectors Corner in the books, folks! I had a ton of fun this week checking out plenty of the cover plates that Nintendo has offered. Don’t forget that you can check them out ,too, by using our complete New 3DS Cover Plates Database! You can track your collection and wish list right on our site, and all you need to do is sign up for a free account.

I’ll see you in two weeks for another article featuring Nintendo collectibles!