If you’re not yet familiar with stop motion filmography, this might just be the perfect time for you to learn about it. So pull up a chair, grab the nearest Yarn Yoshi amiibo to you, and get ready to be amazed by all the work put into seemingly simple Poochy & Yoshi’s Woolly World shorts that Nintendo U.K. has so beautifully detailed for us.

Here’s the thing: Stop motion filming isn’t simple at all; it’s actually a complex process that requires a lot of time, and a whole bunch of patience for those involved. As a longtime fan and follower of stop motion pictures, I have a huge appreciation for the boatload of talent put into projects involving the artistry of the craft. Just as Nintendo has described, the process involves positioning models (like the Yarn Yoshi and Poochy amiibo in this instance), taking a series of photos, and then moving the models again in very slight ways. When the photos are put into motion, frame by frame, they give off the impression that the objects are moving. 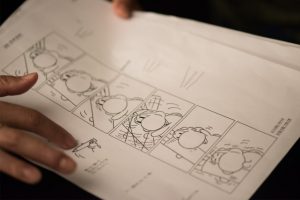 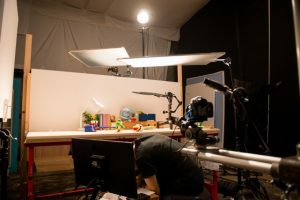 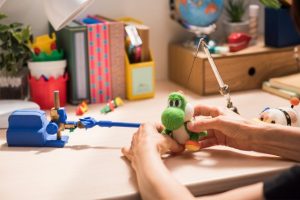 If that still doesn’t sound like a big deal to you, get this: It takes 12 photos to create just a second’s worth of film for one of the Yoshi shorts. And when you think even more about it, when it comes to the editing process after the photos are taken, even more time needs to be put into making sure everything in each frame matches up just right. Lighting, subject placement (of both main models and background materials), facial expressions, and a lot of other minuscule details need to be tweaked until they’re absolutely perfect. Hours upon hours of work are put into one simple second of the life behind Poochy and Yoshi. It’s pretty crazy– and awesome– when you think about it.

Whether you’re already a stop motion fanatic, or you just happened to learn about it today, you might be interested in learning more about the precise process of what it took to bring Poochy and Yoshi to life for Nintendo’s recent shorts. I highly recommend scrolling through the visual intricacies over at Nintendo of Europe’s site to get a better idea of how these small masterpieces came to be. You won’t be disappointed!

Nintendo’s also highlighted a lot of fun parts of the process in the video below. Check it out!