The sport of soccer (football, if you’re not ‘Murican) is sometimes referred to by another name: the beautiful game. Popularized by Pelé, arguably the greatest footballer of all time, it’s a phrase used to describe the fluidity of the sport: the personality the players show on the pitch; the spectacle they communicate with their style; the way you can discern aspects of their lives and selves simply by the way they play the game.

Released 15 years ago today on the Nintendo GameCube, Melee was – and is – far more than a simple follow-up to its N64 predecessor. It’s the perfect sequel, more than doubling the size of the cast, adding a multitude of game modes, and – whether by accidental design, or some strange fortune – has proven to be one of the longest lasting, most resilient games of all time.

Development for Melee was infamously hasty. Masahiro Sakurai and his team were pressured greatly to get the game out within the GameCube’s launch window, which was in crucial need of a surefire hit. The frenzied schedule dictated certain elements of the game’s design – certain original characters were passed over in favor of cloned movesets, and more importantly, the physics engine contained many exploits and quirks that would provide instrumental to the game’s unique place in the gaming landscape.

Playing Melee for the first time, however, nobody would consider it rushed in the slightest – the game is relatively free of glitches and bugs, and plays very fast and tight. The cast more than doubled from the N64 original, ballooning from 12 to 26 fully capable fighters, and while a good chunk of that number was indeed “clone” characters, each contestant had their own personality and flavor to them. 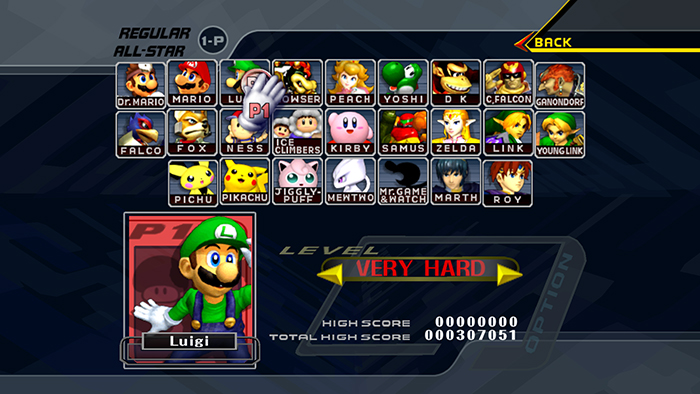 One may look at the cast of Melee at the time and raise an eyebrow at certain choices. Roy? That guy’s game hadn’t even come out then! But the choice of characters was not only unpredictable – it was varied to an impressive degree. Sakurai not only stacked the roster with franchise heavyweights like Ganondorf or Mewtwo, or hot newer personalities like Sheik and Falco; he pulled two (er, three) characters deep from Nintendo’s past – Ice Climbers and Mr. Game and Watch – along with Japan-only Fire Emblem characters. It’s where the tradition of Smash celebrating Nintendo as a whole, and not just its heavy hitters, really truly began.

The stage selection was also buffed considerably, not only bringing back a couple N64 staples, but adding a diverse, fun array of places to deck it out. While a number were janky and obtrusive with their hazards, that’s part of what made them so fun. Not to mention the music, an eclectic collection of remixes from Nintendo’s past that were as fitting as they were catchy. And the graphics have aged surprisingly well, as the game is still relatively pleasant to watch today, even if it lacks the fancy high definition of some of its successors.

While Smash’s heart has always lied at its multiplayer, Melee multiplied the number of game modes exponentially while only removing one (the admittedly fun Board the Platforms). These single-player offerings, along with the various other bonuses, undoubtedly helped the game’s legacy.

Besides the returning one-player mode (now renamed “Classic”), which involved progressing through stages in classic Arcade style, Melee added two significant single-player modes. The first was adventure, a sort of platforming, almost Metroid-Mario-esque series of levels that involved playing through various Nintendo worlds – usually with classic Smash bouts, but with the occasional other type of level thrown in (such as trying to escape Zebes, or defeat a giant Kirby). While a bit more rigorous than classic, it proved much more memorable, and while Brawl’s Subspace Emissary pulled much from it, nothing quite like it has been seen since. 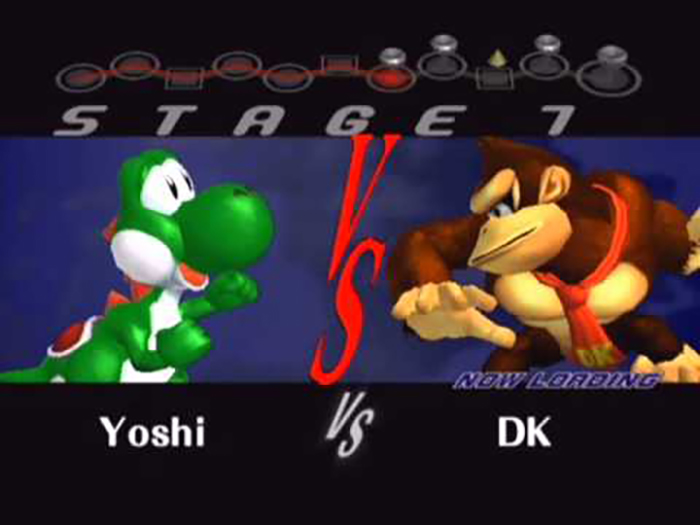 The other was All-Star, now a staple of the series: Players take a character and battle through a gauntlet of fighters on only one life with limited recovery, culminating in a chaotic duel versus dozens of Mr. Game and Watches. Providing a sizable challenge to those who had mastered the other modes, All-Star has appeared in both Brawl and Smash 4 as well, and is likely here to stay.

Of course, there were tons of other great offerings. Event Mode offered more specific rulesets and challenges, some of which were liable to drive young children (i.e. me and my siblings) insane. Stadium mode not only offered a place to break targets in… Break the Targets, but an opportunity to brutally slug a sandbag several thousand feet in Home-Run Contest, or defeat hordes of nondescript wire meshes in Multi-Man Melee. Even multiplayer offered some variety, with Special Melee, which allowed you to play very slow or invisible matches. There was a little bit of something for everyone, and all from toddlers to adults could find a mode that suited their preference.

The trophy system also began in Melee, and once more serves to show how the series is a celebration of Nintendo’s past. Players could collect trophies of some of their favorite Nintendo figures, from Mr. Saturn, to Misty, to Tom Nook, and play the lottery for a chance to get more. While this was before the age of video game achievements, trophies provided not only a way to ‘member your favorite Nintendo games, but also an incentive to play more and catch ‘em all. 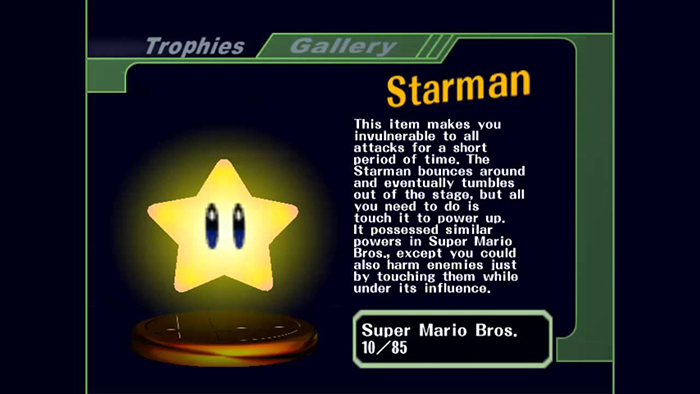 All of this made Melee great – no, fantastic. But few could predict the legendary status the game would achieve…

As mentioned above, Melee came with many technical oddities that allowed you to exploit the physics engine in multitudinous ways. It didn’t take long for people to discover these tricks, give them names – wavedashing, L-canceling, directional influence, etc. – and use them in matches. While some of these exploits were known by Sakurai’s team in development, they couldn’t have imagined the lengths to which people would take them.

Competitive gaming was still a relatively novel thing when Melee released. While games like Street Fighter II had had competitions for some time, nobody could predict the height the industry (more commonly referred to as “eSports”) would reach in future years. Thus, when competitive Melee tournaments started sprouting up, it must have been a very strange thing indeed to Sakurai and co., who intended Smash to be a fun, yet deep, party game. But this was only the beginning. 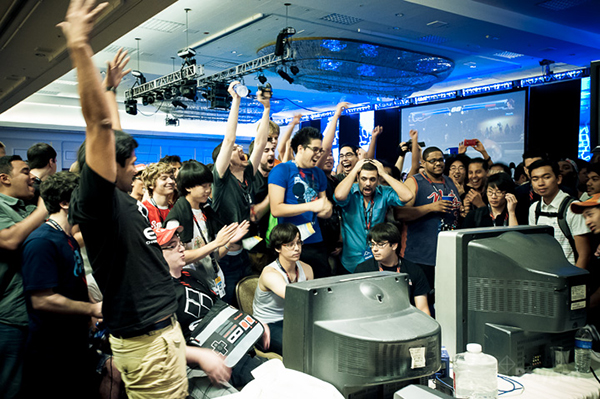 The story of the competitive Smash community is too long to recount in one mere article (in fact, it took me two), but it’s a tale worth hearing. From the scene’s rise in the mid-2000’s, the Melee community went through much turbulence on the road to where they lay today. From the reign of Ken, the “King of Smash,” to the dark ages around when Brawl was released, to the resurgence leading up to EVO 2013’s donation drive and beyond… it’s a history rich with players, stories and experiences. Check out The Smash Brothers documentary if you want to learn more.

And that brings us to today. 15 years after its release, even with two sequels, Melee is still played competitively, and it’s no anomaly. Why? Well obviously Brawl and Smash 4 play differently – Sakurai saw the gap between the greatest and the not-so-greatest and Melee, and decided it was too large. While he gets some flack for not creating a true sequel, I can understand his intentions – the difference between one who knows the ins and outs of Melee and one who doesn’t is immense, and I can sympathize with his desire to create a fun fighting game that anybody can pick up and play. 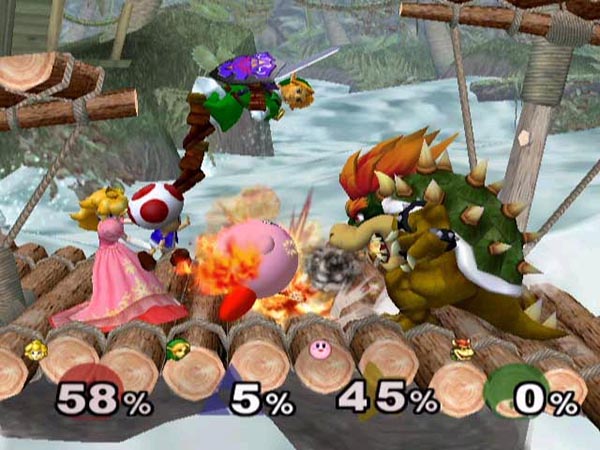 But that said, Melee is a game like no other, and all the better for it. The variety of playstyles and characters, coupled with the sheer flexibility of the engine, breed an environment that allows players to express themselves in the game. Whether it’s the wild unpredictability of Mang0, the mental fortitude of PPMD, or even the grandiose style of someone like Bizzarro Flame, one can discern something about a Melee player from their playstyle. And that’s something very, very few video games can boast of.

That’s what makes it a beautiful game.

Even without the competitive scene, there’s no doubt Melee would be remembered fondly today. It’s the best selling GameCube title of all time, a vast improvement over its predecessor, and one that set many improvements for the game going forward. But the competitive aspect adds a whole other layer – a whole other community – that the game thrives by. It’s a truly unique sort of experience, one that is summed up by the legendary commentator Wynton “Prog” Smith, a man far more eloquent than I:

“You know… Smash? It’s just like jazz. You’ll get all sorts of other fighting games – it’s like classical music where the sheet music is in front of you, and there’s really no room to improvise. But with Smash, you have the chords there. You don’t know what you’re gonna fill it with. It all is improv; and you just take it moment by moment. Sometimes it’s not about the notes that you play, it’s about the notes that you miss, and that’s really important in Smash.”

Whether your metaphor is music or sports, Melee is its own beast. Something truly special, a sort of lightning-in-a-bottle experience that is unlikely to ever happen again. It’s changed some people’s lives irrevocably, and will continue to do so long past the time we might expect it to.