While Pokémon Sun & Moon aren’t officially releasing until this Friday in North America it’s unfortunate to say the code for the games leaked early, with forums around the internet hosting all sorts of details regarding new Pokémon, story beats and miscellaneous secrets.

Naturally Nintendo is none-too-happy with the leaks and have started taking action. Those who have went online with the leaked games ahead of release have begun being locked out of not just Pokémon’s online features but essentially every service that is connected to Nintendo Network IDs, including the eShop. 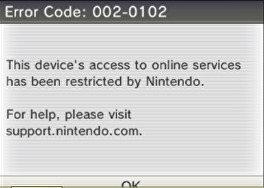 This is especially unfortunate for hardcore Pokémon fans who decided to nab the game early via the leak, as it totally rules out access to Pokémon Bank. The only solutions at this point are to factory reset, get a new 3DS, or contact Nintendo support and hope they remove the restrictions.