The latest Pokémon Sun & Moon trailer came out today, and this time it was all about new evolutions, with a new pair of Alolan forms and a couple new trainers for good nature. While some of these were seen previously due to the CoroCoro leaks this month (thanks to the trailer and the update on the official website), we now know much, much more about these. Let’s have at it and see what’s new in Alola!

Shown first was Type: Null’s evolution Silvally. As seen in CoroCoro, the growth this Pokémon experiences with the bond of its trainer causes it to break its restricting helmet and embrace its power. It’s fiercely loyal to said trainer, putting its own life on the line in order to protect them if need be. Featuring the unique ability to change its type, special drives can be inserted into its head to activate its ability: RKS System. These changes affect its appearance as well, with its somatic cells mutating and changing to reflect the type alteration in varying colors of light. Operating similarly to Arceus, there exists a drive for every type, and these will not only change Silvally’s type, but also the type of its signature move Multi-Attack. It was said to have been created in emulation of mythological Pokémon to combat a certain threat though for now that still remains a mystery. 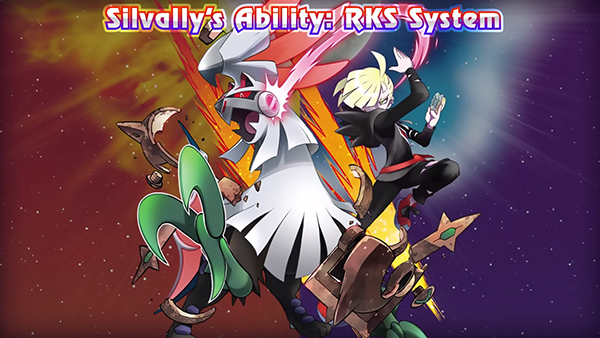 Likewise from Corocoro are the fully revealed evolutionary forms of Jangmo-o. First becoming Hakamo-o, it gains the Fighting-type and takes to a life of solitude. Before a battle it’ll perform a dance and war cry, the clanging of its many scales adding to the effect. With how effective these scales are as armor, Hakamo-o doesn’t worry about defense at all. When it does take hits, these scales can sometimes fall off only to regrow, though Hakamo-o sees the amount it lost in a battle as a sign of its strength and ability and will show off its now bare arms in victory. When next it evolves it becomes Kommo-o, growing massively in power as it returns to its birth site. They’re known to watch over the Jangmo-o that live there, though from a standoffish distance. There are legends about Kommo-o that say its scales shine in order to ward off a great darkness and that its focus on attaining power through battle is to combat this threat. It does so with massively powerful uppercuts said to change landscapes and via its signature move Clanging Scales. By weaponizing the sound of its scales it can cause a high amount of damage, though will lose some Defense in the process. 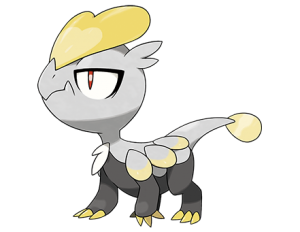 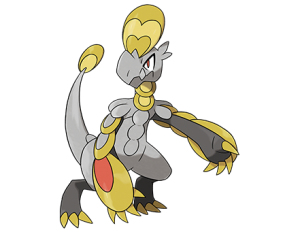 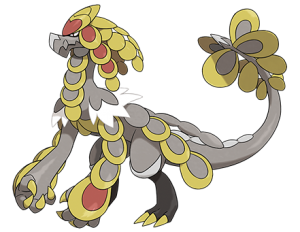 Next is Ribombee, one of the cutest Pokémon I’ve seen in a long time via the evolution of Cutiefly. It collects pollen and nectar in order to make Pollen Puffs, known for serving a variety of uses. They can be used as food, to damage enemies, cause effects like paralysis, or even relieve fatigue – and they’re popular (and sometimes expensive) supplements sold across Alola. While it seems an altogether pleasant Pokémon, it doesn’t care much for rain. Due to the way it transports pollen via the fluffy hairs covering its body, a little shower can ruin this Pokémon’s day. Natives have taken to noting when Ribombee is active as a sign of continued pleasant weather, adding to the positive vibe this Pokémon exudes. 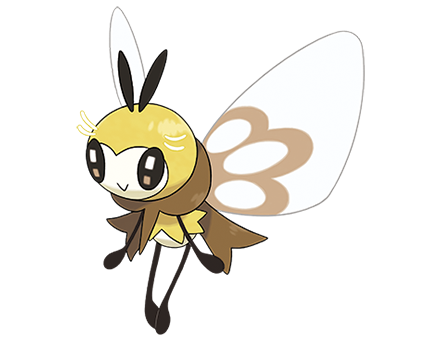 The last new evolutions we saw are from Bounsweet, the poor little Grass-type that’s so adorable, people don’t realize when it’s fleeing for its life in terror. Once it grows into Steenee, the calyx on its head has hardened further, letting it frolic without fear. The fragrance it gives off naturally has become all the more pleasant, and it’s known for taking on some tomboyish traits as well. Known for twirling about, it has the unfortunate side effect of unintentionally striking nearby things with its calyx with no cares given. More intentionally, it combines this hard headgear with some fierce kicks while battling. 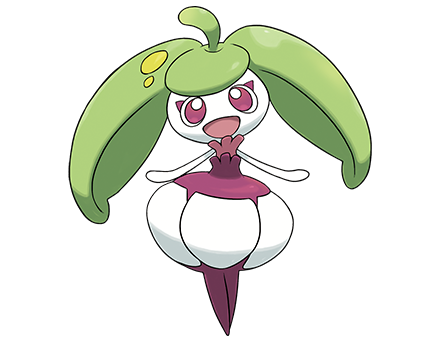 This carries over into its own evolution, Tsareena. This queenly Pokémon is renowned for its top class leg strikes to the point it’s the only Pokémon capable of learning the move Trop Kick. That power comes at a bit of a price though, as it’s quite haughty and will even glare at its trainer if it feels they aren’t on the same page. It’s become accustomed to respect, perhaps thanks to the evolution ritual said to occur with them in the wild, where other Steenee will give the strongest among them their blessing as they evolve to protect the weak Bounsweet. It may have a weakness of its own in the form of its crown, however, as it’s said they’ll lose their strength if it’s so much as touched there. Finally, it has its own ability as well: Queenly Majesty. This one bars the use of priority attacks through the power of its overwhelming regality. 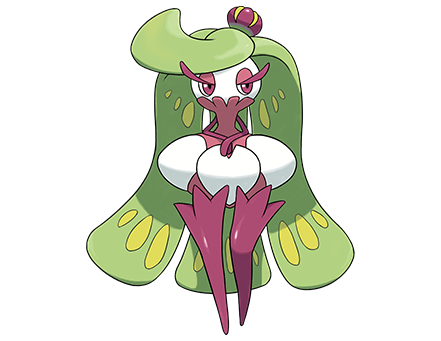 That does it for the brand new Pokémon but there’s still some info to be found that was hinted from CoroCoro. The Alolan forms keep on coming with another pair of Kanto natives getting a tropical variation. While Alolan Grimer was spotted, it’s now known it also evolves into Alolan Muk. Sporting some vibrant colorations and jagged protrusions, these Poison/Dark-type alternatives spawned from the importation of Grimer to handle the growing trash problems as Alola was populated. We go into more depth about Alolan Grimer and Alolan Muk here. 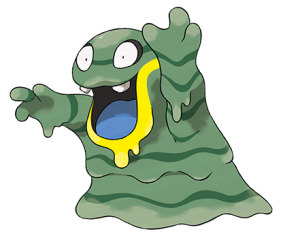 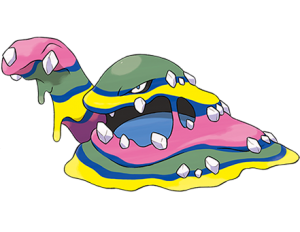 Another Kahuna and Trial Captain have made their entrances. Olivia, Kahuna of Akala Island, is noted for being a bit young for her position and quite modest as well. Ilima, on the other hand, is a Trial Captain who specializes in the Normal-type and has a history with the local trainer school. Get a more detailed understanding of Olivia and Ilima and their roles in the games here. 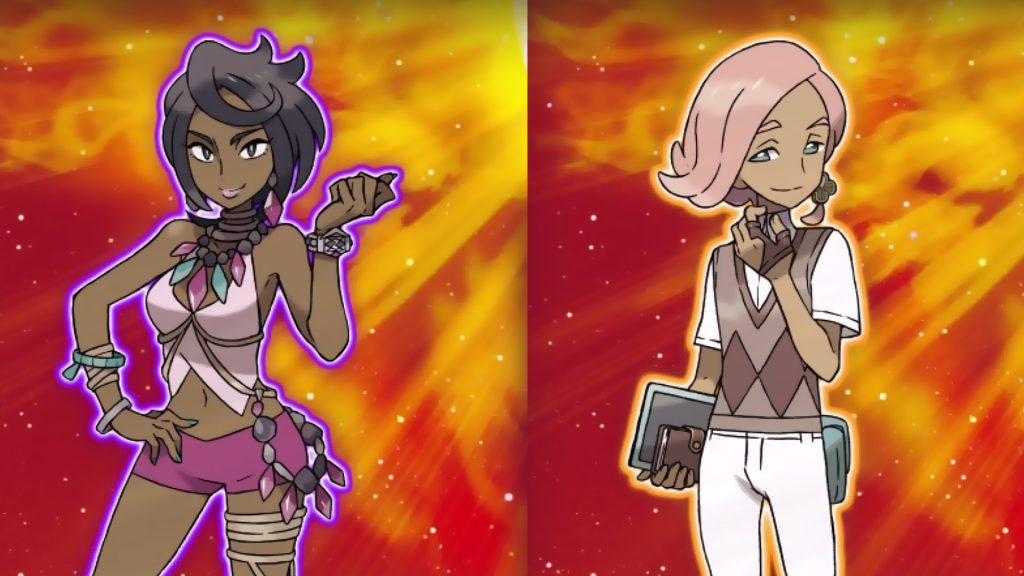 That does it for this round of reveals as we’re just about a month away from the release of Sun & Moon. Sooner than that though will be the special demo coming out next week. You won’t want to miss this one as it’s a chance to play through a separate section of the game early, as well as an opportunity to earn a special Greninja, which has the ability to become Ash-Greninja that can then be sent to Sun & Moon. Stay tuned for more news as it comes, and get excited: we’re almost there!