When it comes to sequels there’s a fine line to balance on. Lean too far one way and it’s more of the same, sacrificing that spark of ingenuity and failing to leave an impact and instead just becoming ‘the second one’. Lean too far the other and you become something far removed from what made the initial effort so special to the point of becoming a different entity altogether whose new ideas eclipse the original’s foundation. If someone were to ask me for an example of a sequel that avoids these trappings and stands proudly at the intersection of improvement and familiarity my answer would be Azure Striker Gunvolt 2. When the first one is one of my favorite eShop titles, that’s saying something, letting Gunvolt 2 be not ‘just’ a great sequel, but a fantastic game in its own right. 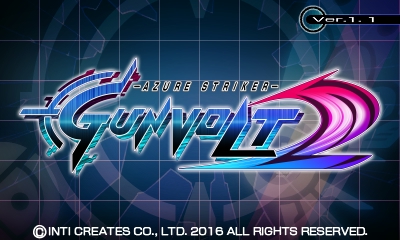 Before going further it warrants mentioning that the Gunvolt games are exceedingly entrenched in anime-like storytelling and style. The art style makes this apparent at a glance but the game’s tone, plot, characters, and use of music wear its inspiration proudly. Your closest ally is a tiny pop idol, all the bosses are defined by their character quirks and themes, and all the voice work is the original Japanese audio. That may be a deal breaker for some, but that would be robbing themselves of the fantastic gameplay under the hood. Speaking of inspiration, these games continue the lineage of the Mega Man Zero series that its developing company, Inti Creates, helmed in the past. Even if you may not be familiar with the Zero games, there’s enough Mega Man DNA to make things familiar in terms of game progression. That said, the gameplay stands on its own in spite of the pedigree and I really think they have something special with these games. If those two points haven’t turned you away then this one’s going to be right up your alley.

The world of Gunvolt is a futuristic one where individuals born with enhanced abilities called Adepts are a facet of life and a potential threat. Gunvolt, or GV, is one of these Adepts though one who operates as a mercenary to face the threat of other Adepts and the corrupt organizations that would utilize them. With power over electricity, the titular Azure Striker is able to channel lightning into enemies, generate a protective field around himself, phase through attacks and perform other feats unlocked over time including air dashes and flashy special attacks. 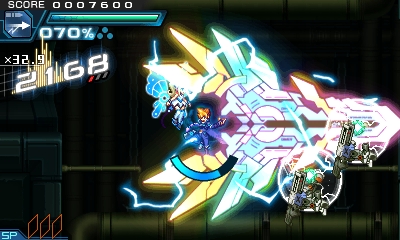 Armed with a special gun that tags enemies, it turns them into lightning rods for your main offensive. While one can simply progress through the levels and attack the enemies as they come the truer essence of Gunvolt lies in maneuvering around enemies without getting hit, tagging as many as you can, and clearing them out in one go. This isn’t necessary for the game itself but grants significantly higher points and just feels rewarding. The real challenge comes from the fact you’ll lose your accumulated ‘kudos’ and multiplier if you’re hit three times, even if you utilize GV’s ability to phase through attacks. This keeps them from being added to your score, though they can be cashed in at checkpoints or by utilizing a special attack. The key to amassing high amounts of kudos, especially with bosses, is to understand the timing of enemies in relation to your own mobility options, creating a game that be approached from multiple angles to go for the greatest result.

The sense of accomplishment that comes from a long string of combos in enhanced by the game’s stellar sprite work and sound design, making everything significant pop visually and providing clear audio cues in the fast pace of the action. Backgrounds are a bit bland, however. While this helps the elements more relevant to gameplay stand out it is unfortunate that stages occasionally end up feeling visually indistinct, a problem the first game has as well. The music itself is fitting, with a few (Japanese) vocal tracks standing out due to their heightened significance and use within the game. If you ever accumulate one thousand or more kudos the music changes to one of these vocal tracks. Likewise if you ever lose all your health there’s a chance at being revived with a different song playing, though at the expense of losing the ability to gain kudos at all. 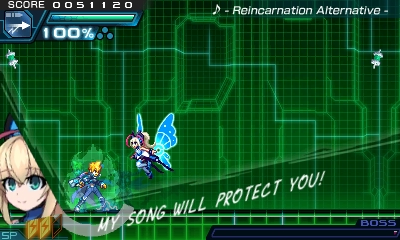 As you play you’re rewarded with experience points, unlocking more special abilities such healing or energy recharges as you level, and materials to craft equipment. These allow for a degree of customization once gathered, offering various types of ammunition for GV’s gun as well as altering how many tags you can have at once, what sort of aerial maneuvers you can do, and affecting your energy consumption rates. I do wish materials were earned a bit more consistently without having to replay stages, though. I chose to play through every stage and finishing the story at least once before ever replaying a level and hardly had materials to craft anything. Once I did begin score, time, and unique challenge focused replays I started to see greater returns on materials both as stage rewards and for completing said challenges. The storyline is also somewhat short though these challenges and the various equipment and skills you can equip offer a high level of replayability.

GV isn’t the only playable character this time around though, with rival character Copen being available with his own storyline. These two story paths share a save file and can be switched at your leisure, meaning you aren’t locked to finishing one story before being able to play the other. Copen plays much differently and this new style definitely left me impressed. 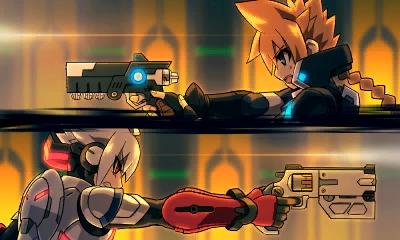 Rather than tag with his gun Copen instead dashes into enemies to mark them before being able to really damage them. By dashing into an enemy you pop up, becoming airborne and able to dash again a certain number of times. Where Gunvolt’s style rewards being able to carefully maneuver around enemies Copen instead encourages dashing from one to another in a chain to keep his kudos growing. It took some getting used to but provides opportunities to really appreciate enemy placement and level design on the developer’s part.

Copen’s differences don’t end with his skillsets though, as his equipment and skill loadouts also change. While GV has designated slots able to hold a single piece of equipment in each one Copen instead has a number of capacity points that each piece of equipment takes up. Rather than gain new skills as he levels, Copen acquires attacks from the bosses he defeats à la Mega Man. These ideas are nothing new to games but having the variety present within a single title allows the two to stand out compared to each other even more. That said the same problems from GV’s story, however few there are, are present in Copen’s as well, though I enjoyed both playthroughs in spite of them. 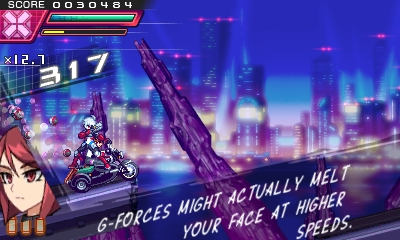 No matter how solid the gameplay is the biggest problem I have with Azure Striker Gunvolt 2 is how short its main campaign is. There are about twenty stages over all across both storylines and with this being a fast paced game I completed the entire array in about four hours. I enjoyed it almost the entire way through, though I will admit the storylines themselves weren’t very compelling to me. The characters and their personalities shine through but that level of flash comes with a lack of substance. As a means to carry the progression of levels it’s serviceable, but I just feel more could be done with the game’s established world. Those problems go out the window when it comes to replayability though, where the gameplay becomes the star and carries itself without worry. While the use of character conversations running simultaneously over the gameplay (à la Star Fox or Kid Icarus Uprising) is nothing new it can sometimes clutter things visually and be a bit of a distraction. On an initial story playthrough that’s not much of a problem and thankfully these can be turned off at any point, which is especially helpful for speed and score based runs.

Amping up the Voltage

For amiibo fans there’s a little something extra within Gunvolt 2. Thanks to a partnership with Yacht Club Games, Shovel Knight himself is a challengeable extra boss fight. By scanning in the Shovel Knight amiibo he can be fought by either GV or Copen and the Blue Burrower’s sprite looks fantastic. That said his moveset is limited, and I’d have liked to seen attacks based on his game’s relics or a special attack akin to what every other boss in the game has. 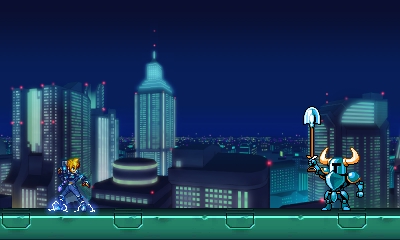 Sadly no other amiibo work with the game, not even for daily unlocks as has been the case in games like Hyrule Warriors or Pokken Tournament. Still, as a completely optional extra from a game and figure not owned by Nintendo I’d say this is a great use of an amiibo and I hope it’s a sign of things to come for other indie titles in the future

If it isn’t clear enough I absolutely recommend Azure Striker Gunvolt 2 to anyone after a fast paced, side scrolling action game. Once you understand the scoring mechanics the game becomes a revelation of well thought out enemy placement and urges you to think lightning quick in order to handle each situation. With this rewarding gameplay as its core wiring it allows a current of well designed bosses, sleek presentation, and high replayability to become a standout title within the eShop. Those who’d rather have a physical copy are in luck too, as a dual pack of the first game and this one is available in stores now. While the first is still wholly enjoyable, it’s thanks to the sequel’s additions and improvements that make it clear lightning really can strike twice.