Rating battles will be making a return to Pokémon Sun & Moon, with four styles of play this time around. Single, Double, Special, and Championship. Special battles have a different set of rules each season, and the first season of Special battles will be single-battle, with a rule set that will allow Pokémon that would not be able to take part under normal circumstances, such as Solgaleo, Lunala, Magearna, and Ash-Greninja. Championship battles will allow players to play with the ruleset for the Pokémon World Championships year-round. The ruleset for 2017, available starting November 18, limits double battles to Pokémon found in Alola’s Pokédex, excluding Mythical Pokémon and legendaries. The championship rules also prevent mega stones from being used, and only allow Pokémon obtained in Pokémon Sun & Moon. 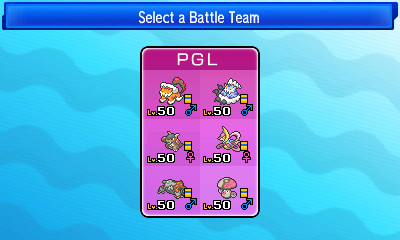 Another system being introduced to these battles is “Your Time,” which will limit the total amount of time each trainer has to use during a Rating Battle to only 10 minutes. You are allotted 60 seconds to pick your Pokémon’s move each turn, so use Your Time wisely!

Another exciting feature being added to Pokémon Global Link with Pokémon Sun & Moon is QR Rental Teams. This new feature will allow trainers to upload their teams via QR code for other players to rent and battle with in Link Battles and certain Rating Battles. Each player can have up to six Battle Teams that they can upload via QR code, and the same Pokémon can be on multiple Battle teams at once.

The Pokémon Global Link is also updating to include Global Missions, online challenges where Trainers around the world can work together to accomplish a goal. The first mission is expected to go live in late November, and the mission’s theme will be “Catch a lot of Pokémon!” The number of Pokémon that will need to be caught, along with other goals, will be announced directly before the mission goes live on the Pokémon Global Link. There will also be rewards for participating in and completing these missions. The website also mentions a special reward for all Pokémon Global Link members once the first mission is successful.

Stick around for even more Pokémon news on Nintendo Wire as we get closer and closer to the release of Pokémon Sun & Moon. Don’t forget to preorder your copy today! Pokémon Sun & Moon are launching on November 18th in the US.