Whenever someone tries to describe the Ace Attorney series, it always comes across as boring. “You play as a defense attorney who has to investigate murders and prove clients innocent!” It doesn’t sound like the most appealing franchise, does it? Well, that assessment couldn’t be farther from the truth, as the Ace Attorney games have been an absolute joy to play ever since Phoenix Wright first stormed over to the states in 2005.

If you’ve never experienced an Ace Attorney title, here is the basic recipe: the defense attorney, whether it be Phoenix or one of his disciples, is thrown into the middle of a murder trial facing impossible odds. The judicial system in their world takes on the “guilty until proven innocent” mantra, so it is up to the defense to completely overturn the allegations against the accused while also providing an alternative culprit. Layer on thousands of lines of text, lots of shouting, over-the-top courtroom drama, tongue-in-cheek humor and a cast of wildly colorful characters, and you have Ace Attorney. Phoenix Wright: Ace Attorney – Spirit of Justice attempts to recapture the underdog nature of the original Ace Attorney games. Wright has been victorious in so many trials in the United States that he is no longer seen as an underdog. To remedy this, Capcom introduced Phoenix to the land of Khura’in: a nation with an immense hatred for defense attorneys.

Phoenix Wright heads to Khura’in to visit longtime assistant and fan-favorite Maya Fey. Upon his arrival, Phoenix immediately finds himself in the courtroom to defend a young boy accused of murder. This is where the twist of Spirit of Justice kicks in. A law known as the Defense Culpability Act states that defense attorneys must suffer the same punishment as the accused if a guilty sentence is handed down. Because the death penalty is the normal sentence, Phoenix now finds himself not only fighting for the life of his client, but his own as well. Paired with the public’s hatred of lawyers, Phoenix once again feels like an underdog in court, as opposed to the dominant veteran we’ve seen in recent entries.

Since defense attorneys fled after the passing of the new law, trials in Khura’in now rely on a form of spirit channeling known as the divination séance. The séance is performed by a new character, Royal Priestess Rayfa Padma Khura’in. While she appears hard nosed on the outside, it’s fun to watch her relationship with Phoenix grow throughout the story. The divination séance also provides new gameplay mechanics. Rayfa allows us to see the last moments before a victim passes away, while also providing her insights into what the visions mean. It’s your job to find a vision that is inconsistent with the statements Rayfa makes. Questioning the statements of royalty is not a matter taken lightly, however, and it causes even more hatred directed towards Phoenix. While it is an intriguing new concept, the divination séance was often frustrating when I felt there were multiple inconsistencies that led to the same conclusion. There is only one correct answer within the game, so it led to penalties that did not feel deserved.

As far as gameplay goes besides the divination séance, it’s standard Ace Attorney fare. In court, you press witnesses for more information and shout “Objection!” when you find a contradiction. Working through each testimony is like a puzzle: you have to figure out where to draw out new information so you can refute it with evidence. Cross examinations are as thrilling as ever, and the mechanic still doesn’t feel stale even after six main games.

It’s very satisfying when you finally find a hole in the testimony, it’s just unfortunate that Spirit of Justice never gets very difficult. It may just be because I’m a hardened Ace Attorney player, but I was able to figure out the answers in the story long before the characters did. This led to lots of scrolling through text just waiting for the game to figure out what I already knew. There were, however, plenty of shocking twists and turns that I never saw coming. Anticipation of the next game-changing moment motivated me to keep playing.

One huge positive is that free investigation returns from the older titles, a feature sorely lacking from 2013’s Dual Destinies. The restrictions of only investigating the scene of the crime have been lifted, so now you can examine every suspicious looking nook and cranny at all locations. One welcome return from Dual Destinies is the “Final Logic” segment, where you must review the entire case to find the final piece of reasoning needed to win. It’s an epic ending to the trial, it’s just a shame that the multiple choice options are always glaringly obvious. Gameplay aside, Ace Attorney has always been about the writing. I was very disappointed with the writing in Dual Destinies, as I thought it failed to capture the spirit of the world and its characters. Luckily, Spirit of Justice returns to form in the writing department, even leading me to laugh out loud on multiple occasions reading the inner monologues of Phoenix and Apollo Justice. For those of you that love the customary Ace Attorney name puns, there are more than ever in Spirit of Justice. A tour guide named Ahlbi Ur’gaid, a patrol guard named Paht Rohl, and that’s just the first case! It’s amazing that the writers are able to throw Phoenix and Co. into such an intense environment while still maintaining the lighthearted nature of the series.

Holding down the fort

While Phoenix is handling things in Khura’in, Apollo Justice and Athena Cykes remain in the States to run the law office. This also represents the return of Athena’s therapy sessions and Apollo’s bracelet ability, providing even more variety in gameplay. It is Cykes who gets to helm the defense in the fourth case, the obvious low point of this game. Cykes is one of the weaker characters to begin with, and the premise and characters featured in her case may be the new low for the Ace Attorney series. After a very strong first three cases, it was a shame to see the game lose all momentum in a case that doesn’t even contribute to the overall story arc of the game.

Speaking of the overall story, though, it might just be the best plotline in the entire franchise. While Phoenix Wright is the titular character of the game, this is Apollo’s tale through and through. Apollo is the playable character for the majority of the game, where we get even more background knowledge on his life before joining Wright and Co. Law Offices. Aside from Apollo’s story, the corrupt judicial system in Khura’in is a crucial plot point in the game, and it’s a tale that feels larger in scope compared to previous Ace Attorney titles. Ace Attorney cases are often judged based on their final case, and Spirit of Justice delivers. After the cringe-worthy fourth case, Spirit of Justice hits back hard, with a finale that deserves to be in the same discussion as Bridge to the Turnabout and Farewell, My Turnabout, arguably the two best cases in the series.

One final narrative disappointment in Spirit of Justice is the main prosecutor, Nahyuta Sahdmadhi. The Ace Attorney franchise has seen fierce prosecutors with layers of personality such as Miles Edgeworth, Godot and Simon Blackquill. In comparison to these characters, Sahdmadhi misses the mark. A Khura’inist monk-turned-prosecutor, Sahdmadhi relies on religious one liners and petty insults to get by. He feels rather irrelevant and onenote, and I didn’t know much about him for most of the game. An attempt at developing his character is made later in the story, but it could have been more meaningful if I had been attached to the character.

Ace Attorney has never looked more beautiful thanks to the capability of the 3DS. The 3D models of the characters from Dual Destinies were redone for Spirit of Justice and now move smoother than ever before. The courtroom is also seen from many different angles, and we see Phoenix actually interact with a piece of evidence in-game, rather than just as a box in the corner. There are also animated cutscenes at the beginning of each case that immediately made me want to dive into the case. Ace Attorney games are often praised for their great soundtrack, and Spirit of Justice is no exception. Don’t play Spirit of Justice with the volume off, you’d be doing yourself a disservice. There’s music for every mood, and all three main lawyers even get their own theme song when they raise an objection. I was actually brought to tears when I heard Maya Fey’s theme for the first time since 2007’s Trials and Tribulations. The music also takes on a foreign flare with Eastern-inspired tones due to the Asian inspired setting.

Spirit of Justice corners players into new courtroom scenarios that seem nearly unsolvable. You’ll never feel like you have the advantage, no matter how close you are to the truth. Then, it clicks. Turn the case on its head, and what seemed like a clear cut murder case turns into something absolutely crazy. And believe me, Spirit of Justice has no shortage of crazy. No matter how hard things get, Phoenix, Apollo and Athena defend their clients until the very end.

The Khura’in judge accidentally refers to Phoenix as “Mr. Light” at one point, which is symbolic of what Phoenix has always represented: a light in the darkness for the falsely accused. The emotional rush of exposing a contradiction and the desperation when things aren’t going well will get your heart racing. Spirit of Justice is the breath of fresh air I didn’t know this franchise needed, but I realize now it’s the Ace Attorney game I’ve always wanted. 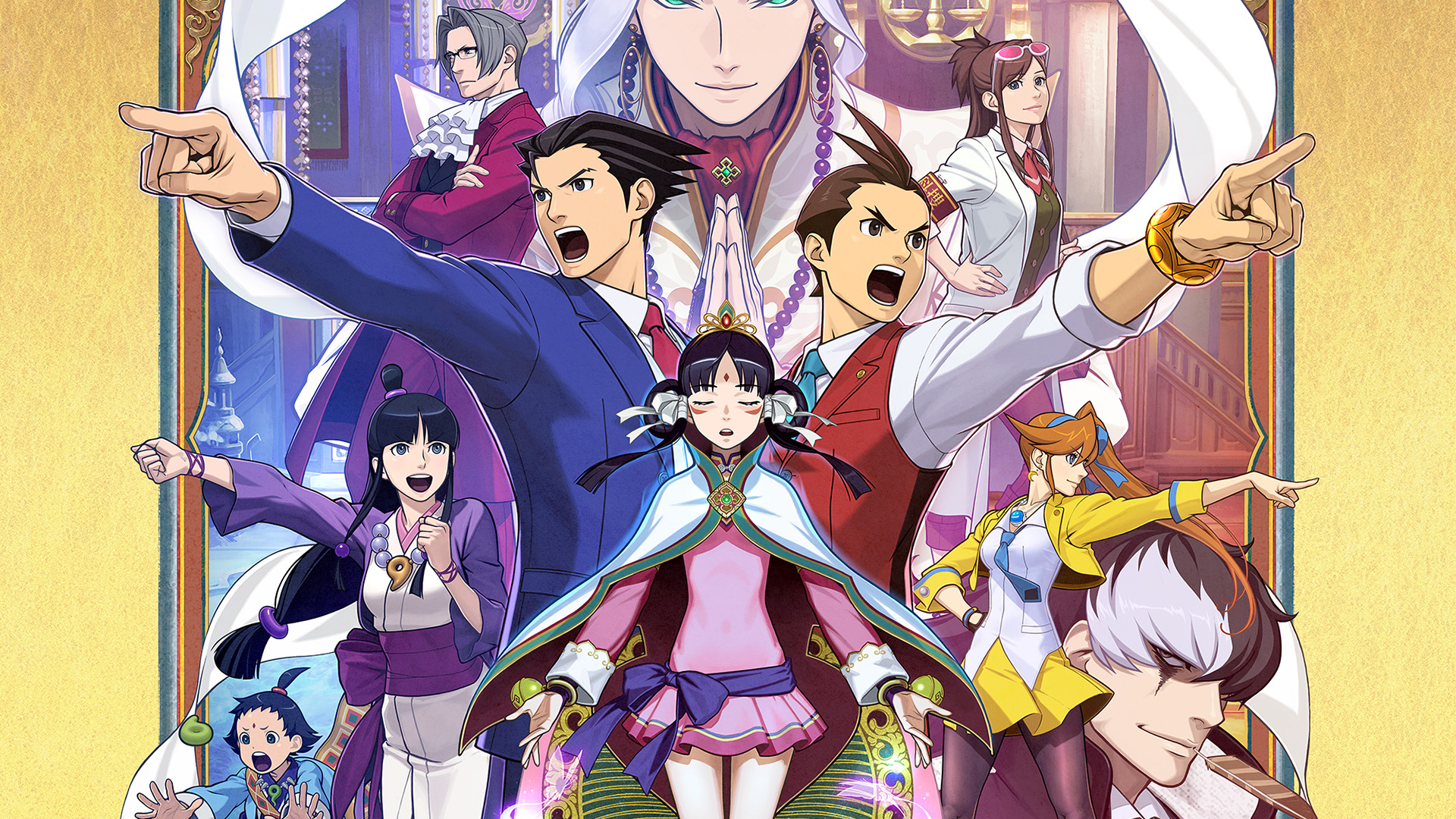