Welcome back to NW’s PAX West 2016 Indie game coverage! In Part 1 we covered upcoming 3DS titles from Azure Striker Gunvolt 2 to Noitu Love Devolution, and this time we’ll be talking about some fresh blood for the Wii U side of things. So without further ado, here are some of the hottest Wii U indie titles that I played.

The third entry in the SteamWorld series, after the oft-forgotten SteamWorld Tower Defense and the much-praised SteamWorld Dig, SteamWorld Heist once again changes up the series’ genre – this time providing a turn-based strategy experience. Starring Captain Piper Farraday, a smuggling robot pirate looking for adventure, the core elements of the game involve invading enemy ships, looting goods, and shooting foes in the head. 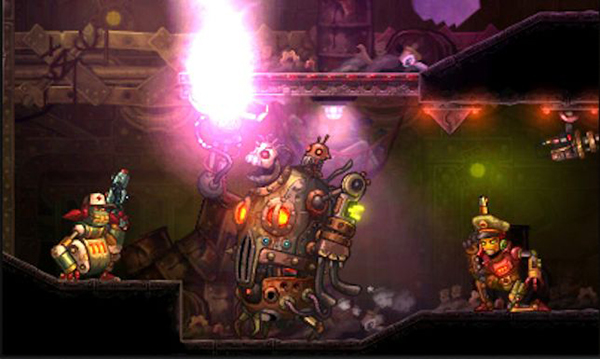 In terms of a gameplay parallel, I’d say Heist plays like 2D Xcom – your characters have a certain movement range which they can travel and still fire in the same turn, and a range in which they cannot fire. Once in position, you aim with the control stick and pull the trigger to see if your shot rings true, or – if close enough – simply punch baddies out of the way. Cover is also important, as it protects you and your foes from shots, so you’ll need to position carefully to get your bullets in while avoiding enemy fire.

Most of the levels are procedurally generated, which is something I’m not a huge fan of personally, but I think it has the potential for good replayability here. There’s also a good assortment of collectible gadgets and weapons (and hats, can’t forget those). Not to mention it has the same nice robo-steampunk aesthetic as always. Having a turn-based strategy based on skill rather than probability is definitely a cool idea, and I’m curious to see where it goes. If you’re absolutely dying to play this one, it’s already available on 3DS. Cool, eh?

As a person who’s always been into viking lore, I’m always welcoming of new nordic-styled games, and Jotun scratches that itch perfectly. The plot is simple – a recently deceased viking warrior, Thora, must prove herself to the gods in order to enter Valhalla. How does she do so? By murdering giants and other beasts of Ginnungagap with little discrimination. If there was one game of the show that ran on pure awesomeness, it was this one.

The demo was a boss fight against Kaunan, the Fire Jotun, and immediately the sense of difference scale and power between the titan and Thora was conveyed. The music was grand and eloquent, and the art style vivid and extremely well animated – the game’s aesthetic is absolutely top notch. As for the fight itself, it was extremely difficult, but in a fair way – Kaunan clearly had patterns and tells to his attacks, so it was all a matter of dodging them while slowly whittling away at him. It was quite an ordeal, as according to the exhibitor, only around 6-7 people a day beat him… but I was one of those few. I have some amount of pride over this. 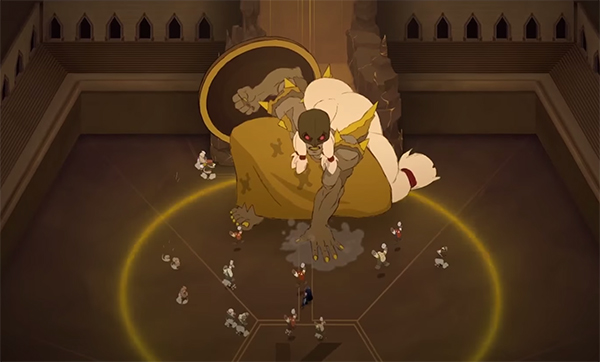 Jotun has had my attention since I heard about its PC release last year, and I’m definitely going to pick it up, especially since it’s available now for a discounted price. If you’re also curious, you can check out our Jotun review, written by our very own Bryan Finch. I know I will.

I was rather giddy for this one – after all, as far as indie series go, Shantae has to be one of my absolute favorites. It’s got everything I love: solid Metroidvania mechanics, cutesy and unique Arabian aesthetic, good humor, monkey dances – what’s not to like? That said, playing the demo made me even more excited for the fourth entry than I thought possible, because WayForward appears to be pulling out all the stops as Shantae goes against her pirate nemesis Risky Boots once more. 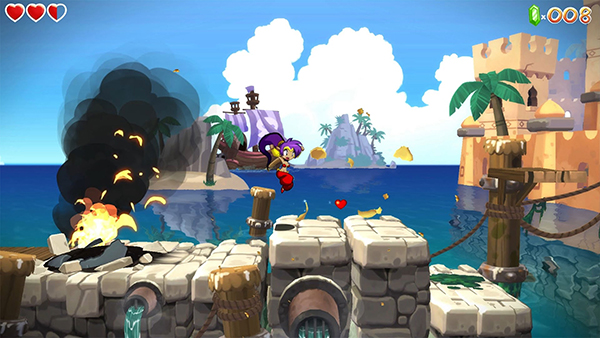 There’s been a slight shift in style since Pirate’s Curse; it’s a little less anime and a little more Disney, but it works wonders, because the mixture of 2D sprites and 3D environments is gorgeous. I couldn’t believe how smooth everything looked, and it controlled just as good as it felt. The level was very reminiscent of the first level from the first game, right down to Scuttle Town burning to the ground, and Shantae’s toolkit was also very similar, having access to her monkey and spider forms once more, though her abilities in the full game will likely be expanded upon. Everything was animated with personality and character, and Jake Kaufman is doing the soundtrack so it’s guaranteed to be fantastic.

Having low expectations and seeing them surpassed is one thing, but having high hopes and seeing them met is another. While the game’s delay is lamentable, if the rest of the game is as wonderful as this demo then this one will be a must-own. There hasn’t been a bad Shantae yet, and I can only hope the series continues to rise in quality and popularity as more entries are made.

If I was excited for Shantae, I’m not quite sure I can put into words the level of anticipation I had to play this. Guacamelee was one of my favorite indie titles in recent years, and upon hearing about DrinkBox Studio’s next effort I was immediately excited, especially upon learning that it would be something very similar in style and yet completely different in atmosphere. Thus came Severed, the tale of the one-armed Sasha and her quest to find her family.

As mentioned, Severed follows Guacamelee’s colorful, jagged style very much, but its sense of tone, setting, and gameplay couldn’t be more different. Guacamelee was a zany, fun romp with open Metroidvania elements and a story based around luchadors and Mexican folklore. Severed is a still and haunting first-person dungeon crawler that’s as unsettling as it is fun. Combat relies upon using the touch screen to swipe and slash at foes, but it’s far from mindless attacking – you must carefully figure out when and where to strike, lest your attack be countered by the enemy. The size of your swipe matters too – bigger strokes do more damage, but smaller ones can be done more quickly. There are even RPG elements, with equipment and a skill tree. 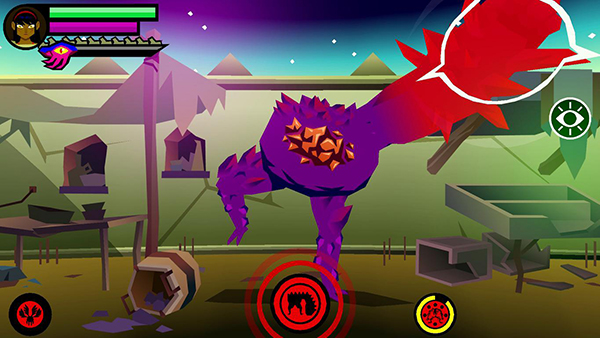 Severed is one of the most unique games I’ve played in quite some time. The combination of aesthetic, atmosphere, and mechanics made for a downright creepy experience. Even within the confines of the demo I could feel emotion pouring from the TV screen, and I have a feeling that the game’s going to make for a very artistic product. It also supports cross buy between Wii U and 3DS, meaning owning it on one gets it for you on the other for absolutely free. Severed may very well be my game of the show, as it was one of the very few that left a distinct impression on me even days after I had played through it.

That’s all for Part 2! Tune in next time for Part 3, where we’ll wrap up our look at Wii U games that were at the show, including YIIK and Earthlock: Festival of Magic. Until then!