Spiritual successors can be a tricky business. At best, they’re fond love letters to games of yore, expertly capturing the intricacies that made classic games so memorable. At worst, they’re cheap, lazy efforts that prey upon the nostalgia of longing fans to deliver a subpar experience that only makes one miss the original more.

I can say with utmost certainty that Axiom Verge is not one of those games.

Created over the course of five years by one man – developer Tom Happ – Axiom Verge is more than a mere callback to the franchise it celebrates: Metroid. It’s a superb, cerebral experience that manages to build off its predecessors and deliver a truly standout adventure that long-time Metroid fans will love.

The game’s story starts off enigmatic, if not uncomplicated. Our protagonist, a scientist known as Trace, is conducting an experiment involving… something, when — as such is wont to happen — things go wrong. As his lab collapses around him, Trace remarks that the event could have been the end of his life… only to wake up in a bizarre, surreal environment with no idea how he got there, where he is, or what’s going on. It’s here that the gameplay kicks into gear, as Trace is left to explore his surroundings. 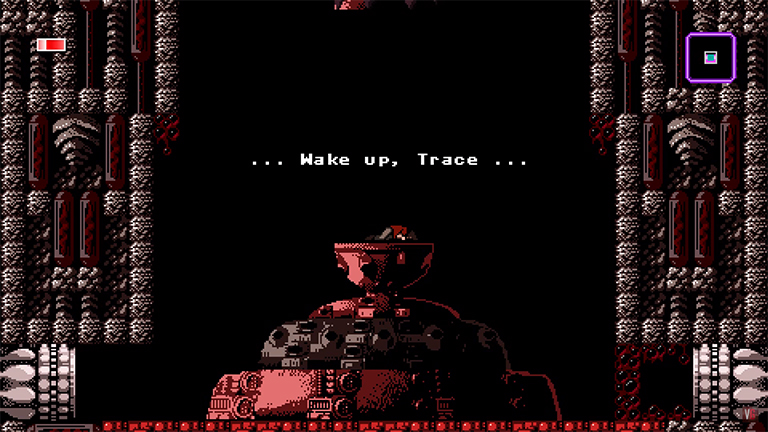 Eventually, he begins hearing the voice of a robotic woman and starts to wonder more and more about his situation. Much of the story of Axiom Verge is based around mystery and the unknown — detailing the progression of events is really spoiling the surprise of the experience. There are a number of clever and interesting twists along the way, and by the end of the game, there’s a rather fascinating aspect of the story explored.

Overall, the plot of Axiom Verge is rather unintrusive, as is typical of retro-styled games. In fact, if I were to offer a single complaint about it, it’s that it could use a little more detail in places — occasionally it feels as if there’s just a little too little present. Still, Trace offers some good sarcastic quips, and the premise and execution are clever and unique enough to offer a pass. This isn’t a game you’d play for the plot, anyway, and I appreciate that its focus is elsewhere.

At a glance, Axiom Verge’s art style is nothing new. How many indie games have done the old, retro-inspired pixel art at this point? Hundreds, if not thousands. But AV stands out against the grain due to its immersive and wonderfully mysterious atmosphere. From the first room onward, walls and floors pulsate with life, and the surroundings are strange and take on almost an H.R. Giger feel. The number of animations for the environment helps the place you’re exploring feel otherworldly, as the possibilities of what it could possibly be fill your mind. It perfectly mirrors the old Metroid feel in that respect. 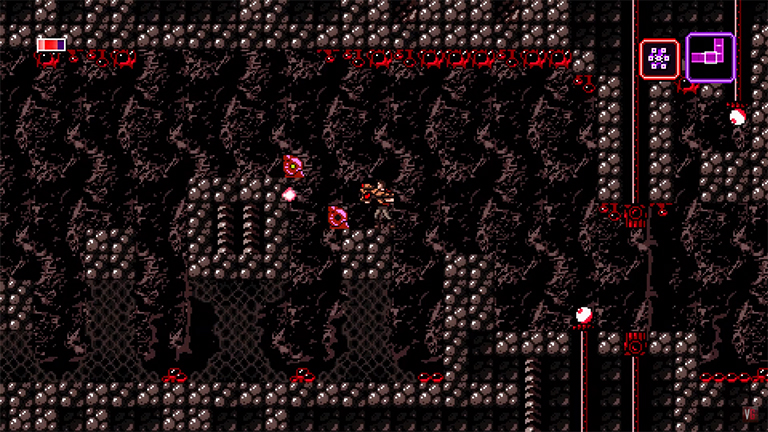 Enemy designs are also varied and creative, with very few of them feeling derivative or unoriginal. Many have not only unique sprites and animations, but a good variety of sound effects that help bring the pixelated monsters to life. Bosses are particularly massive and grotesque, appearing as giant, inhuman abominations that are in need of eradication. While the style as a whole may be nothing particularly new, the creativity of the monster and environmental design help it stand out, and the retro style works well with the glitching mechanic, which we’ll talk about in a bit.

The soundtrack is also very well implemented, relying more on eerie ambiance then adventurous tunes. Despite that, there are some catchy beats — particularly in the starting area, Eribu — that help put a little spring in Trace’s escapades. Sound effects for text, items and weapons all feel natural and vivid, and all the little details are nailed down. From a presentation standpoint, Axiom Verge is nearly flawless, so long as you aren’t completely turned off by the aforementioned retro style.

The core of Axiom Verge lies, of course, in its Metroidvania gameplay — exploring, finding items that allow you to explore more, fighting enemies along the way and so on. It’s nothing short of expertly crafted — Axiom Verge has some of the finest Metroidvania I’ve ever had the pleasure of playing, with tight controls, fantastic level design and a fun arsenal of tools and weapons to use.

Exploration in many modern games tends to be guided — arrows here, glowing dots there… directions everywhere you look. AV spits upon such designs, as you’re never told where exactly to go or what exactly to do… and it works beautifully. The thrill of venturing into the unknown is a refreshing feeling after many games where the objectives are overly obvious, and it’s never particularly confusing or frustrating to figure out where to go. Upon picking up a new item, old areas where you can use said item immediately spring to mind, and there was maybe one moment where I was stumped for longer than five minutes about where to go next. The layout of the levels and the world map are also well-constructed so that backtracking to search for collectables is a cinch after a certain point. Of course, said items are also used to find hidden passages and other secrets throughout the world, with some being legitimately difficult to track down.

These items Trace picks up during the adventure are quite varied and interesting. There are a couple of genre staples present, such as a high-jump item, but there’s also an incredible amount of fresh ideas: From a lab coat that allows you to phase through walls to a drone you can fire and manually control to so much more that doesn’t warrant spoiling. It was always a treat to come upon a new power up and wonder what new areas you could explore next, which is a Metroidvania feeling this game nails. 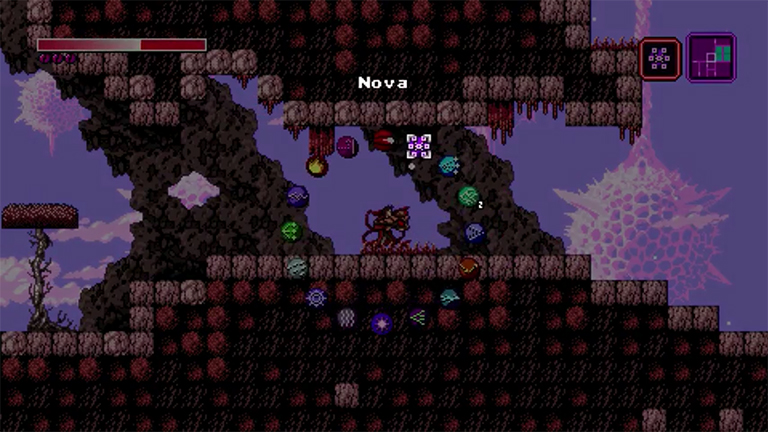 Trace’s main weapon is a gun known as the Axiom Disruptor, which shoots out simple red laser bursts at a brisk pace. However, he soon comes across a huge variety of other blasters to wield, each with their own creative and inventive uses that allow for a variety of playstyles. Do you prefer carefully aimed shots that strike with precision from a distance? Try weapons like the detonating multi-shot Nova or the angular Reflector. Like things up close and personal? Use the Kilver, which fires a short burst of electricity, or utilize your Laser Drill as a combat tool instead of an exploratory one. While some are distinctly more powerful than others, there are enough weapons — 20 of them — to suit every playstyle.

The feel of combat is also rather different from Metroid. Samus’s adventures were more run-and-gun affairs, as weapons like the Plasma Beam and the Screw Attack allowed her to tear through enemies quickly and easily past a certain point. Axiom Verge plays a bit more deliberately and carefully, favoring careful shot set ups and utilizing a weapon based on the environment rather than running through swarms of baddies guns ablazing. Trace is far from an overpowered killing machine, and even when you’re late in the game and have a ton of health and firepower, you’ll have to approach certain enemies carefully. This difference in playstyle helps AV distinguish itself, as it leaves the combat feeling different, yet familiar.

The most notable mechanic in Axiom Verge’s arsenal is the “glitch” system. Using a tool known as the Address Disruptor, Trace is able to glitch enemies and surroundings into different states, which can have a variety of effects. Generally, glitching the environment will create platforms or clear passageways, occasionally revealing secret areas or paths forward. Glitching is far more interesting when applied to enemies, as every individual creature reacts differently: Some grow tiny and more vulnerable, some end up with self destructive tendencies and others will even become stronger when their code is scrambled. It’s definitely fun to test out the glitching process on foes and it’s a great element in the strategical shooting the game employs. 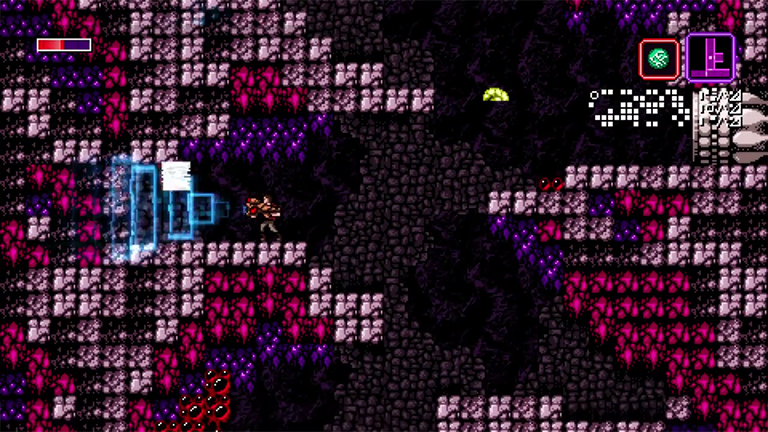 The game also makes great use of the Wii U’s unique capabilities. The GamePad screen contains not only a minimap that can be easily glanced at while playing, but also a weapon select, manual objective marking and off-TV play. The Wii U version is also the only version of the game with online leaderboards for the Speedrun mode, which tracks time and removes all of the game’s cutscenes to encourage getting the fastest time possible. Axiom Verge is a game that offers many different styles and options in its play, and feels all the more liberating for it.

Axiom Verge is far more than a mere spiritual successor to Metroid — it’s a fantastic game in its own right, made by someone who understands the genre just as well as those who spawned it. Just as Mega Man fans had Shovel Knight and Sonic aficionados had Freedom Planet, so too will Metroid diehards have Axiom Verge. It joins the ranks of other great indie Metroidvanias like Guacamelee or the legendary Cave Story as an experience that can’t be missed.

Appealing to nostalgia and days gone by doesn’t always work out, but Tom Happ has crafted a bona fide great game — one whose shortcomings are far outnumbered by its excellent points. It’s well worth its $20 price tag, as my playthrough took over 10 hours — and that involved getting only 70% of the items. I’ll definitely be back to obtain the rest and return in the future to play it over and over again. If you’re a Metroid fan, Axiom Verge is a must-own. If you’re not, it’s still definitely worth a look. Even if some have been disappointed by Samus’s recent escapades, the spirit of the Hunter lives on in another. 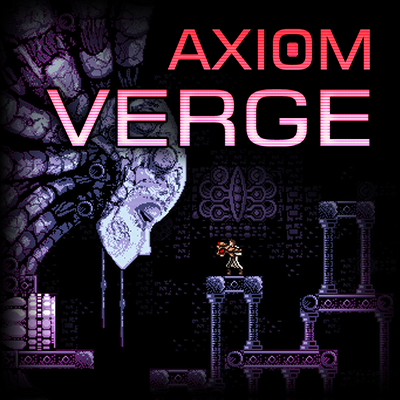