The latest CoroCoro leaks have come and alongside that are a handful of new Pokémon! As this is all from a sudden, text heavy, Japanese source certain elements could change or update in time so consider this all preliminary.

First up is a pair themed after sandcastles, of all things. The smaller is known as Sunabaa while the larger is called Shirodesuna. Both are sporting shovels on their heads and judging by accompanying artwork are capable of trapping other Pokémon when they get too close, or maybe even wander inside. They’ll be Ghost/Ground types and look to fit the beaches of Alola perfectly. 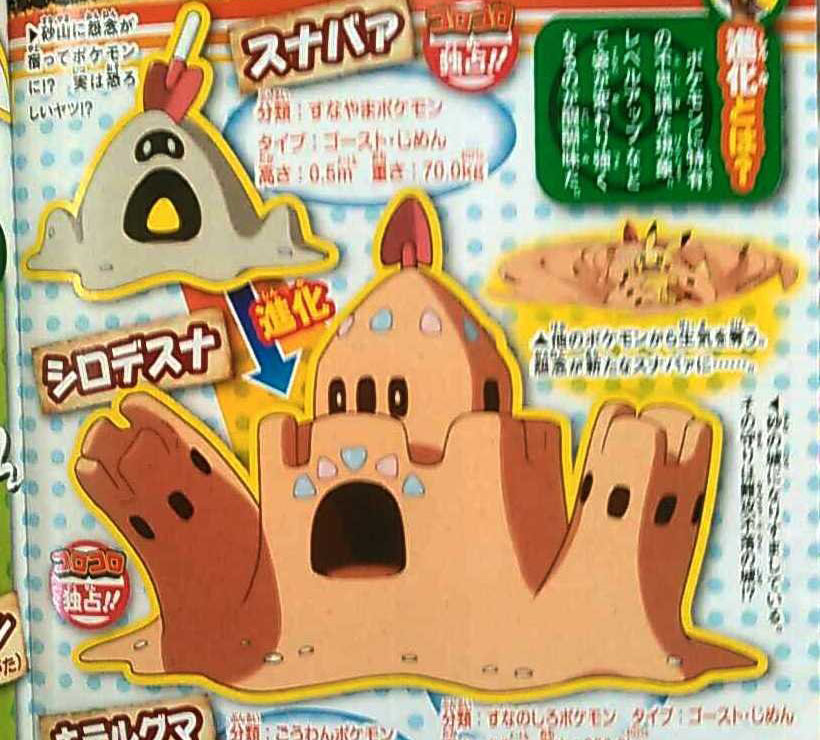 Next is Yowashi, a small Water type fish. What’s most curious about this one is it appears to be able to gather up other fish to make itself into what looks like a larger collective. While there’ve been things like the symbiosis between certain, separate varieties of Pokémon (such as Slowpoke and Shellder, or Mantine and Remoraid) or evolution brought about by gathering (like Magnemite into Magneton or Beldum all the way through to Metagross) this looks to be the first “legion” of Pokémon and it remains to be seen how such a feature could work. 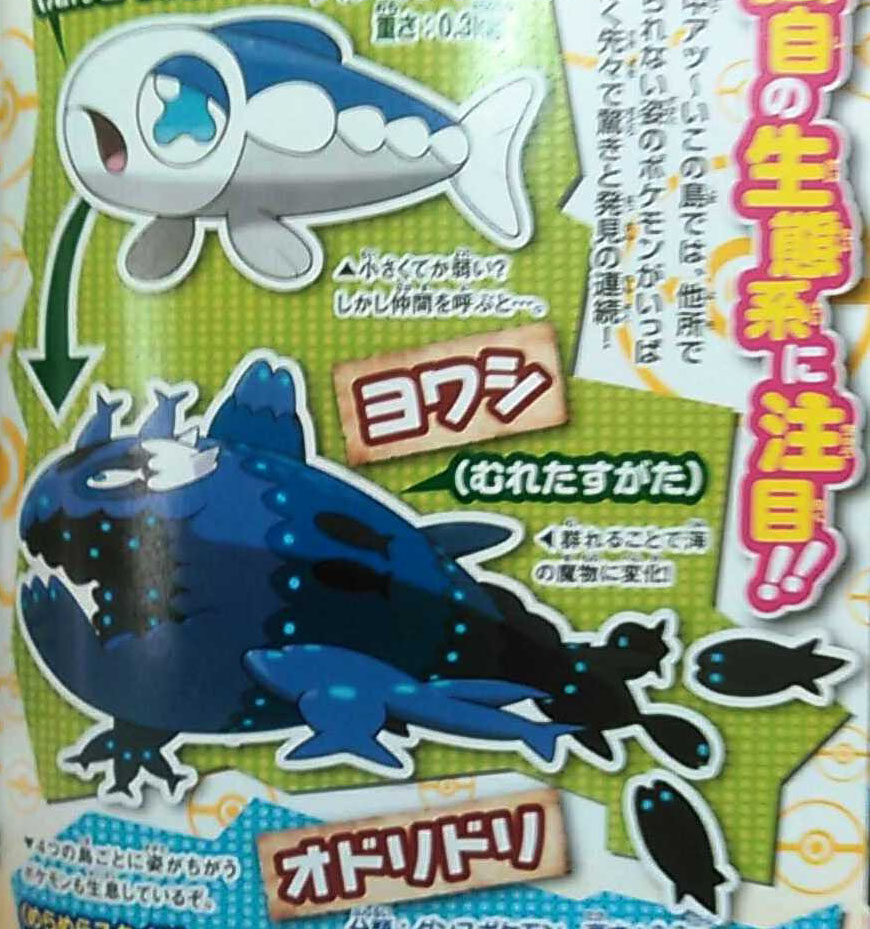 Finally for brand new Pokémon is the pre-evolved form of Bewear. Called Nuikoguma, it’s also Normal/Fighting and looks to be a bit of a scrapper. Waving its forepaws about furiously, it definitely comes off as cute but just like Bewear is probably a bit more dangerous than it looks. 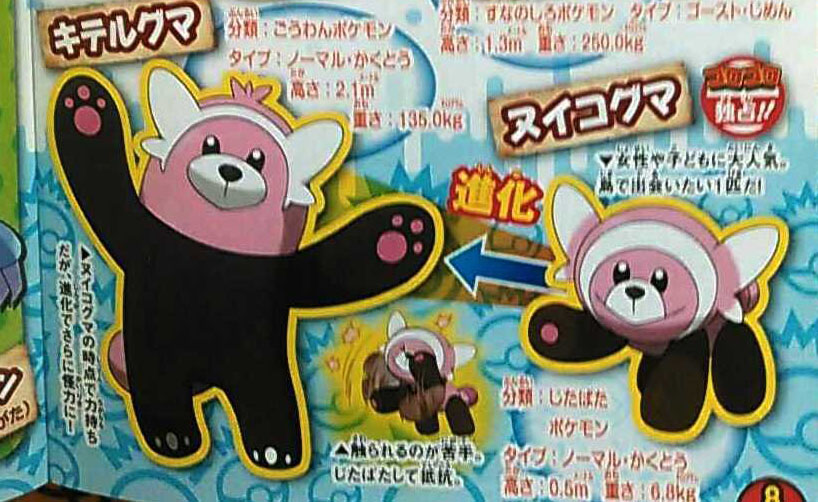 While that does it for brand new Pokémon, a couple Alolan forms have also made their debut. Kanto’s original feline is getting a Dark type makeover, as native Meowth have gotten pretty smug. This may be due to them being bred by “the royal family of Alola”. Next is Alolan Marowak, a Fire/Ghost type that evokes tribal elements such as fire dancing with its ignited bone. This developed in order to handle its natural predators and definitely looks like another great addition to Alola’s diverse variations. 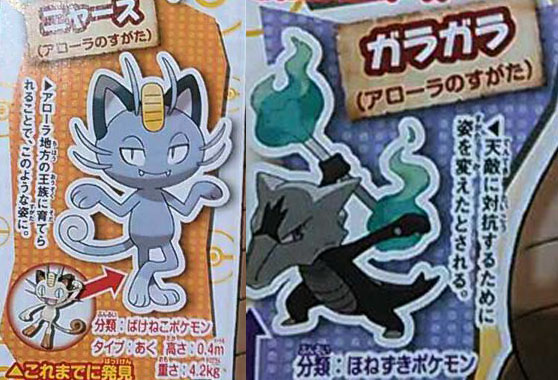 The last bit of news from these leaks aren’t tied directly to particular Pokémon, but definitely involves something Pokémon fans have been dealing with since the beginning. It isn’t all sunshine and beaches in Alola, as some nefarious individuals are hard at work with their own agenda. Without further ado, we have Team Skull making their villainous debut. While their exact plans aren’t known at this time we do know that two members are known as Burumeri (the pink haired girl) and “Boss” Guzuma. Whether he really is their main leader or just a higher up remains to be seen. 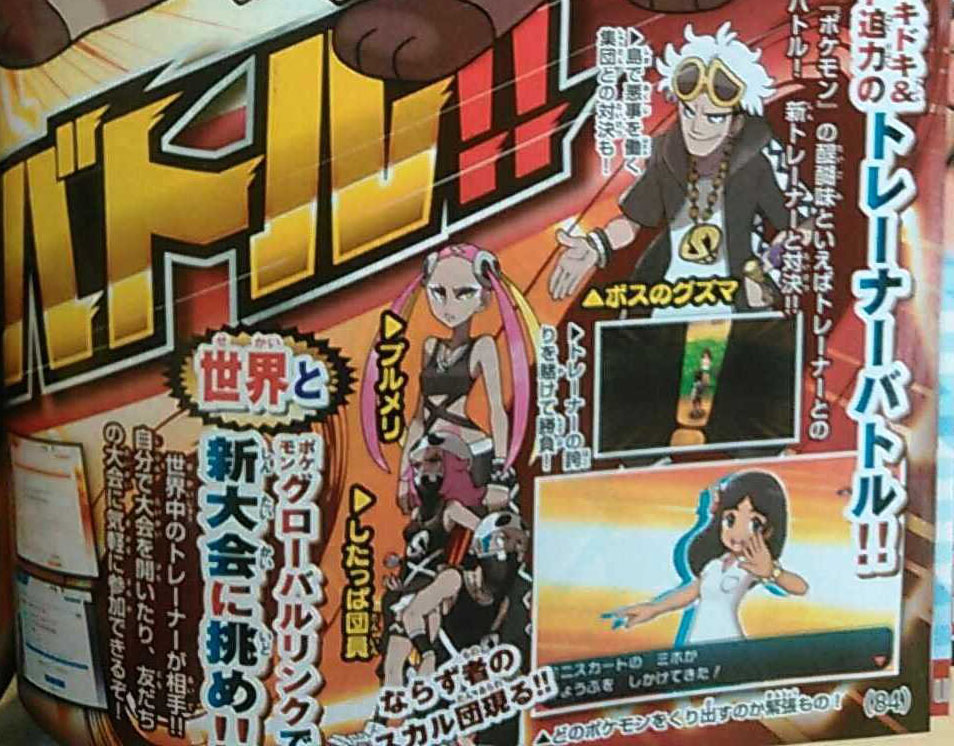 Again, this is all preliminary and could change and update over time. Likewise names will change in the localization process, but thanks to the fine folks over at Serebii we have these early scans and information. Remember, there’s going to be new Pokémon news revealed in just a few days on August 12th. Finally, the next Corocoro will also have a poster for Rockruff’s “secret” evolution. Hopefully that adorable pup gets all the attention it deserves and we’ll see something extra special!