In the midst of the ongoing mythical Pokémon distributions leading up to the launch of Sun and Moon, the steam Pokémon Volcanion will make its North American debut via GameStop. As had been the case with past mystery gifts offered by GameStop it will be available via a physical download code printed on a card. Volcanion will be redeemable in X, Y, Omega Ruby, and Alpha Sapphire allowing all Gen VI players to sample it’s boiling hot power. 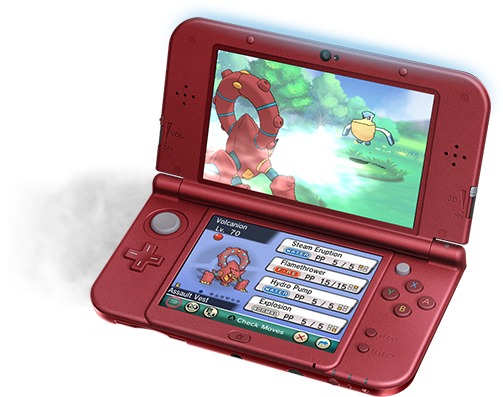 As the first Fire/Water type Pokémon in the series Volcanion is already plenty unique, but it’s also the only Pokémon capable of using the move Steam Eruption. This gift Volcanion will be level 70 with the ability Water Absorb and will hold an Assault Vest. Its other three attacks will be Flamethrower, Hydro Pump, and Explosion.

Alongside new and exciting potential in battles, Volcanion will also have unique story elements in each pair of Gen VI games. In X and Y bringing it to the Lumiose Press building you can see notes and memos from fifteen years ago on this elusive Pokémon. For Omega Ruby and Alpha Sapphire, taking it to TV Mauville will grant you a viewing of an old program starring the known explorer Brandon as he pursues Volcanion.

All of these additions will be available starting in October. In the past similar distributions have lasted about a month to lead into the new games’ release, though as always with physical codes it’s while supplies last.