The latest Sun and Moon trailer just went live and with it comes new information, new forms, new Pokémon, new ways to travel, new types of challenges, and new ways to attack. In other words, a whole lot of stuff! Let’s dive right in and break it all down piece by piece.

First off, Alolan forms. As far off region with more ecological diversity, certain Pokémon appear a little different in Alola. Though that’d be an understatement, as the regional variance seen extends not only to appearances, but to types and movesets as well. Take Exeggutor, the Grass and Psychic palm tree that’s been around since Red and Blue. In Alola, it’s really able to grow (and grow…) with a long neck/trunk making it extremely tall. It likewise now has a tail, and has gained of all things the Dragon-type and the ability Frisk. 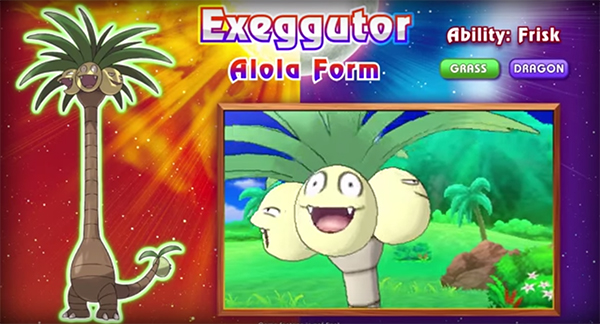 Next up are a few Pokémon that have been getting used to more frigid climes instead, indicating Alola will also feature at least one snowy area alongside its beaches. Vulpix and Ninetales are up first, developing Ice as a type in place of their more standard Fire, while also switching to adorable snow white coats. Snow Cloak, fittingly enough, will be their ability while Ninetales also develops Fairy as a secondary typing. Also donning Snow Cloaks are Sandshrew and Sandslash, gaining the ability and the Ice-type alongside the foxes. That said, both of them show it off in different ways, with Sandshrew taking on an igloo-like appearance while Sandslash will grow icey quills. Both of them will also be part Steel, making Fire and Fighting a huge problem for these Alolan forms. 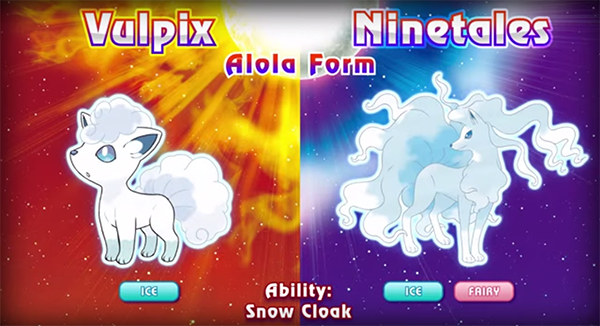 That covers the known Pokémon gaining Alola forms, but there’s plenty of island natives to check out too! First up is Oricorio, a dancing Flying-type Pokémon with the brand new Dancer ability. This allows it to copy any “Dance” moves (such as Quiver Dance) used while it’s in battle, maintaining the power balance. It also takes a cue from the likes of Wormadam and Deerling, having multiple type combinations and appearances across the same species. Depending on which island in the region your Oricorio is caught on it will either be Baile Style, Pom-Pom Style, Pa’u Style or Sensu Style. These all have Flying as a secondary type but will also be Fire, Electric, Psychic or Ghost as well, respectively. It also has a unique move, Revelation Dance, which will match its primary type no matter which style it is. Each style also has unique cries and animations, making them a prime example of the long held mantra: Gotta Catch ‘em All. 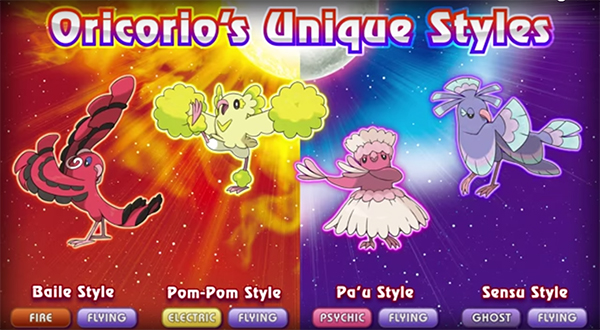 Another new Pokémon with form differences comes in the form of Minior. This Rock/Flying-type has an outer shell that will crumble away during battle. This is accomplished through its ability Shields Down, which may go so far as to alter its stat distribution like Darmanitan’s Zen Mode or the attack Shell Smash. Of course this is just speculation, the only fact of its effect is that it reveals the interior body of Minior. Its typing and ability don’t change, but there are different colors available such as yellow, blue, pink and orange. No word on if these have different stats or are found on different islands in Alola, but the amount of variety seen in this region’s Pokémon is already astounding.

Next up are evolutions and pre-evolved forms of already revealed Pokémon as well as another pair of new faces. Yungoos will be able to evolve into the upright and suspiciously coiffed Gumshoos. Its typing and abilities will remain the same after evolving, though it’s sure to be a more powerful opponent. Formantis and Lurantis are a pair of brand new, evolutionarily linked Pokémon. Both pure Grass and with the ability Leaf Guard, they come alongside the brand new attack Solar Blade. Could this be a physical variant of the existing and longstanding move Solar Beam? 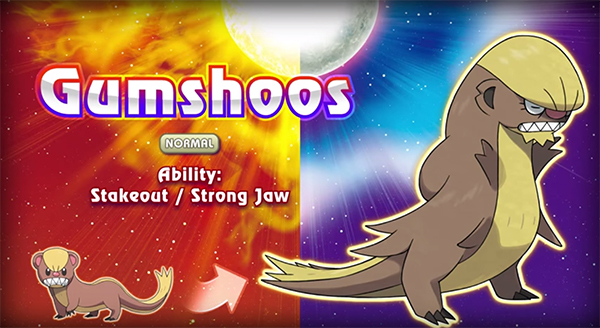 Finally, we have Mudbray, a pure Ground Pokémon that can evolve into Mudsdale. This little donkey also has access to the abilities Own Tempo and the new to the series Stamina, which raises its defense stat when it’s hit.

A closer look at riding Pokémon

While we knew Pokémon riding would return in an upgraded fashion, we received a further look at the feature. Land (with the likes of Tauros and Mudsdale) and sea based (atop Sharpedo and Lapras) travel was a given, but now we see that flying will also be done in this style. Shown with a harnessed Charizard swooping in to pick up its trainer and take to the skies. Unfortunately, it wasn’t shown if this will be the traditional “Fly” style or more like Soaring with Mega Latias and Latios in Omega Ruby and Alpha Sapphire. 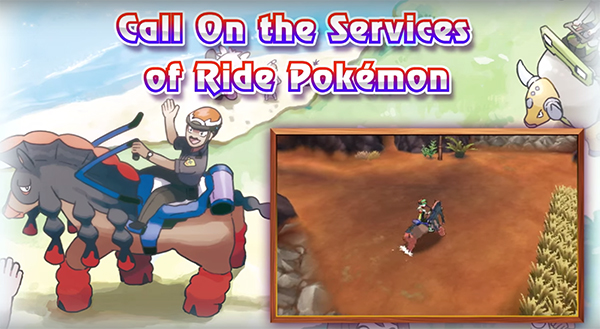 New to Sun and Moon will be the Island Challenge, a rite of passage within the Alola region that involves traveling to its four islands and taking part in special trials. These vary from island to island and each have a hosting Trial Captain specializing in a given Pokémon type. These Trial Captains include Mallow, a Grass specialist that tasks you with finding four ingredients; Lana, a Water specialist concerned with the state of the surrounding waters; Sophocles, a young looking Electric specialist who doesn’t seem very invested in his Trial; and Kiawe, a Fire specialist out to challenge your powers of observation via dances.

The trials don’t end with these challenges though, as once you’ve completed the task you’ll be faced with powerful Totem Pokémon. One of these will be a Totem Gumshoos, which receives an immediate defense boost at the battle’s start via “flaring up its aura.” No word on if this has ties to the Aura utilized by Lucario, but there’s a possibility. Totem Pokémon can also call for help from others, such as this Gumshoos bringing in a Yungoos to face you in a two-on-one style battle. Once these Trials are fully completed, you face the final obstacle: the Kahuna. We’ve already met one of these in the form of Hala, now officially revealed as the Kahuna of Melemele Island. Could this entire setup replace the long-held Gym system? It would still amount to eight distinct, specialized trainers to battle while adding in variety and themeing to the process. Only time will tell, as it’s only three and a half months until the games’ release and we still haven’t seen a character called a “Gym Leader.” 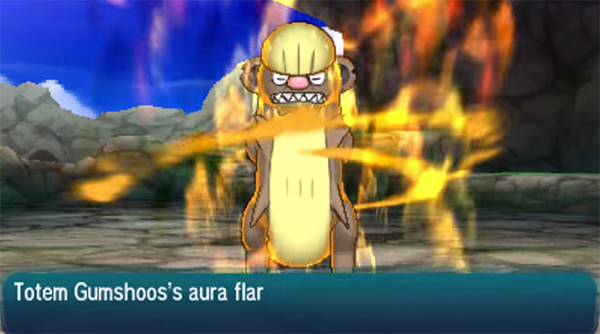 Finally, the trailer showcased a new battle technique called Z-Moves. A single Z-Move can be used once per battle, though there will be one for each type. These include the Electric-type Gigavolt Havoc, the Grass-type Bloom Doom, the Fire-type Inferno Overdrive, and the Water-type Hydro Vortex. Utilizing a Z-Ring worn around the wrist and type-specific Z-Crystals, these attacks are at your command through the power of stylish posing! 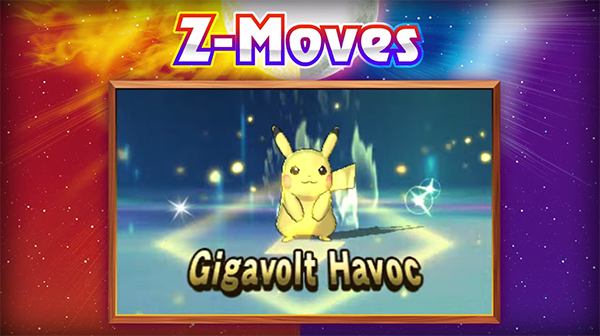 That does it for the latest Sun and Moon trailer, and it was quite a lot to go through. This has given a great glimpse at just how unique Alola’s going to be and how that’ll affect traveling, battling, catching and journeying with your Pokémon. November 18th can’t get here fast enough, but until it does, keep your eyes on Nintendo Wire for all the latest on these exciting new chapters in the ever-growing world of Pokémon.