Indie hit Shovel Knight recently made its way over to Japan, and — given the game’s utterly faithful retro roots — Yacht Club Games went all-out on localizing content for the Land of the Rising Sun, as detailed in a write-up on the localization process that went up today on their website.

YCG began with a lengthy history of localization changes, with some help from Clyde Mandelin (creator of legendsoflocalization.com and head of the Mother 3 Fan Translation). They particularly detail changes that occurred between the NES and Famicom versions of games, due to differences in both culture and hardware at the time.

Yacht Club then go on to explain the various changes they made to better suit Shovel Knight for a Japanese audience. As the game was made to be able to run on NES hardware with no drawbacks, they did the same with the Famicom for Japan, changing up fonts, animations, sounds, and more to better suit the console’s hardware and nostalgia for that period of Japanese gaming. They also added some little touches to certain graphical and style elements, such as replacing some of the Gastronomer’s food with rice balls (the “reserve 4Kids,” as it’s known) and making certain items and characters have a slightly more Japanese flair. They even changed the cheat codes, because, as they state, “butt is sadly not exactly the funniest word in Japan.” 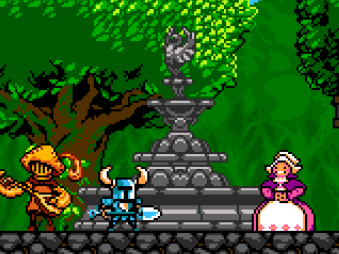 While localization usually went in the opposite direction back in the ’80s, it’s wonderful to see a developer that goes all out on making sure their game suits a foreign audience. Shovel Knight was a game that played heavily on nostalgia, and Yacht Club Games seemed to do great in making sure that nostalgia transferred overseas.

Shovel Knight is available on many platforms, including Wii U and 3DS. It comes highly recommended by our staff.