Get pumped up for Hyper Training in Pokémon Sun and Moon

The new Sun and Moon trailer graced us with more than just new Pokémon and abilities, we’ve also learned about a new feature called Hyper Training. With Hyper Training, Pokémon can be strengthened and have their individual value stats improved even when they reach level 100. What is known is that this is sure to be another great tool for trainers and battlers that want to see just how strong they and their Pokémon can get together. 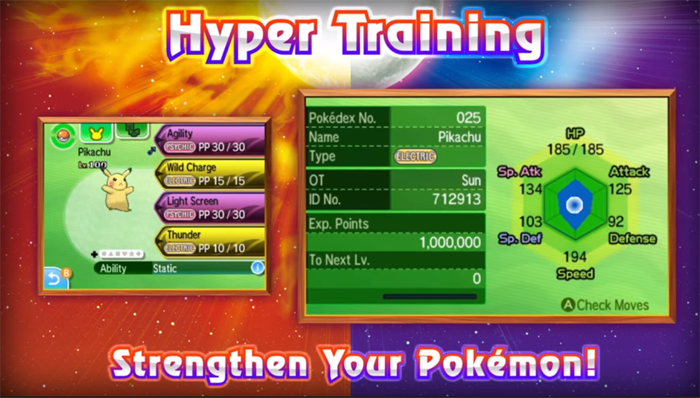 By meeting Mr. Hyper in the Alola region you can learn about and perform Hyper Training. All he’ll ask for is Bottle Caps, a new item that sounds similar to Heart Scales in how they’ll be used. No word on how to find them regularly within the games, but that doesn’t mean we don’t know how you can at least get one. The legendary Magearna will come with a Bottle Cap once it’s distributed to players, allowing this feature to be tested and experienced first hand. Past that it’s still a mystery, though hopefully they aren’t too tough to come by.

As it’s a brand new and barely talked about feature, time will tell just how impactful it will be on competitive battling. Once more info and the mechanics are known we’ll see and share, but for now get excited about powering up your Pokémon!