Nintendo has announced its extensive lineup for San Diego Comic-Con later this month. Tournaments and playable Wii U and 3DS titles will be available on the show floor. They include several yet-to-be-released titles, like Yo-Kai Watch 2 and Metroid Prime: Federation Force. 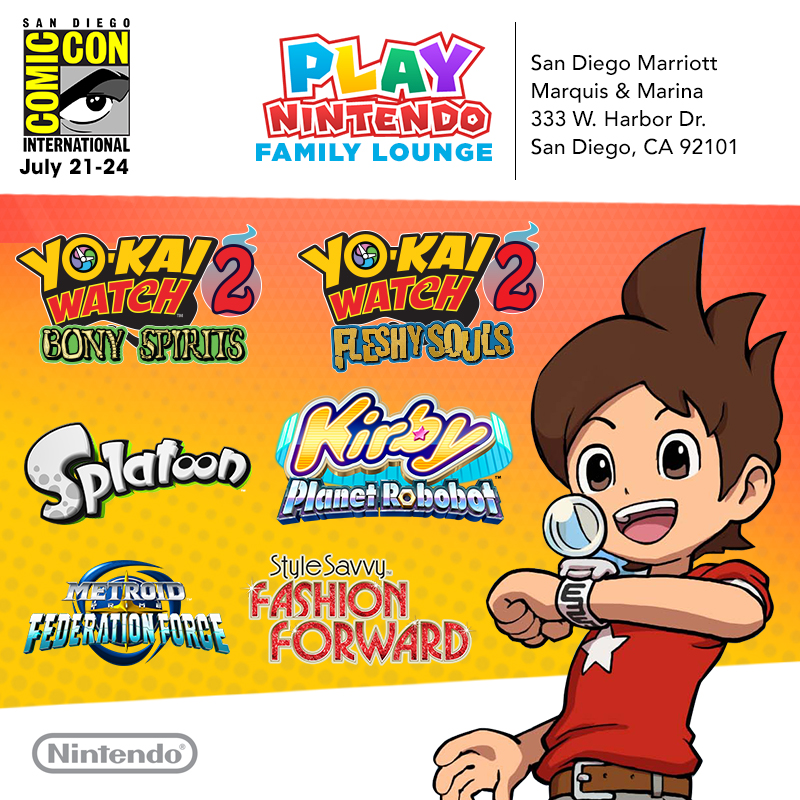 Super Smash Bros. for Wii U 12 & Under Tournament (July 23): Nintendo fans that are 12 years old or younger and have parental consent can participate in a Super Smash Bros. for Wii U tournament at 2 p.m. on July 23. The tournament will be live-streamed on the Nintendo Twitch channel, so even people that can’t be there have a chance to keep an eye on the action. Tournament slots are limited for the one-day event, and fans will be able to sign up the day of the event on a first-come, first-served basis. The Grand and First Prize winners will each receive a prize pack filled with Nintendo products and merchandise.

The Play Nintendo Challenge (July 21-22, July 24): Play through three elimination rounds composed of three different Wii U games (Splatoon, Mario Kart 8 and Pokkén Tournament) in a group to see if you can emerge victorious! Participation will be on a first-come, first-served basis. The Play Nintendo Challenge runs all day and takes less than 30 minutes to complete. Winners will receive an exclusive champion Nintendo T-shirt. Players who participate may receive other giveaways while supplies last based on how far they make it in the challenge.

YO-KAI WATCH Voice Actor Event (July 22): Actors Alicyn Packard, J.W. Terry and Melissa Hutchison, who provide the voices for Jibanyan, Whisper and Komasan, respectively, in the YO-KAI WATCH video game and animated TV series, will be conducting a Q&A session, doing live voice demos and a table read of a scene from Season 2 of the animated TV series from 3 p.m. to 4 p.m. PT. Select attendees will also have an opportunity to receive an autograph or take photos with the actors.

Pokémon Fan Gathering Area (July 21-24): Meet up with fellow Pokémon fans to trade Pokémon, pick up some cool swag (while supplies last) and relax in a Pokémon gaming zone. The gathering area will be open during show hours.

Photo Opportunities (July 21-24): At various times during all four days, popular characters like Mario, Luigi, Pikachu, Kirby and Jibanyan from the YO-KAI WATCH series will make surprise appearances to take photos with fans.

Many games, both first and third party, will also be made available in the lounge.

Nintendo will also have a few Splatoon events available at its booth throughout the week. Details below:

Splatoon Multiplayer Battles (July 21-24): Fans of the kid or squid variety can show off their Splatoon skills in 4v4 multiplayer matches throughout the day.

Splatoon Splatfest (July 22-23): On Friday and Saturday, come enjoy the last Splatfest competition by battling for Callie or Marie in Splatoon.

Splatoon amiibo Challenges (July 21-24): Get an up-close view of the latest amiibo lineup for Splatoon and experience the challenges and bonus content that they unlock.

If you’re attending Comic-Con this year, Nintendo should have enough to keep you busy! Send us your photos of the event on Twitter so we can share the fun with those who can’t attend!