A new series, titled Miitomo’s Potential!, debuted today on Miitomo’s website. Part one of the series covers the origins of the Mii and the Mii creation tool.

Yoshio Sakamoto, producer of Metroid, Rhythm Heaven, and Wario Ware, Inc. Mega Microgame$ sat down with Shigesato Itoi, most famous for his work on all three Mother games, to talk about his work on Tomodachi Collection and the creation of the Mii characters. 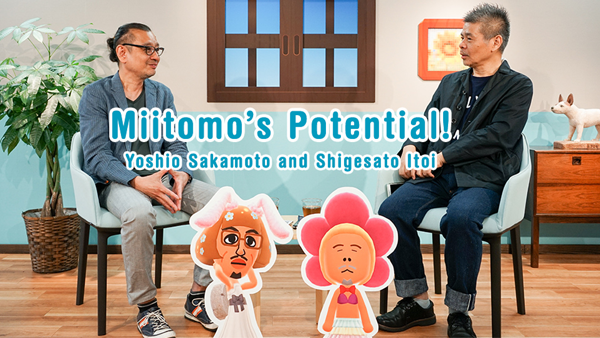 Through the conversation we learned that the Mii editor was originally an avatar creation tool for a game called “Otana no Onna no Uranai Techo” (Women’s Fortune Telling Pocket Notebook). That game never made it to release, but Mr. Itoi showed the avatar editor to Satoru Iwata, who told him “this seems like something Mr. Miyamoto would be excited about.” Mr. Itoi then states that they “left the project to Mr. Iwata and had forgotten about it.”

Shigeru Miyamoto had been thinking for awhile about creating the Mii software, so Mr. Itoi was eventually called up. He was nervous at first, but was then told that Mr. Miyamoto wanted to use the Avatar editor in the Wii. Most of Mr. Itoi’s team then joined the Wii Team to create the Mii Channel.

Mr. Itoi goes on to state that he would like the chance to work on “Otona no Onna no Uranai Techo” again, but realizes that even something incomplete can be realized in subsequent projects, so that it feels like the unfinished games are still around.