When I logged onto the Nintendo eShop to download my copy of Kick & Fennick, I had little idea of what sort of adventure I was about to embark on. The reasoning behind my intentional ignorance was simple: I wanted to enter my playthrough lacking any preconceived notions about the game — y’know, to write a better review. That isn’t to say I was completely in the dark, as its title called back to a number of similarly-named franchises: Banjo-Kazooie… Ratchet & Clank… Jak & Daxter. It was then, as the jolly Wii U eShop music pumped over my kickin’ sound system, that I made my grisly realization: all three of those games were platformers. I hated platformers.

Fortunately, Kick & Fennick completely blew me away — not in terms of story or music or presentation or anything like that, but by just how much fun I managed to have with it. It’s a platformer without jumping that utilizes a fairly clever gameplay mechanic: a gigantic freaking rifle with a ricochet that propels you through the air. Though the title is lacking in virtually every aspect other than gameplay, the creativity of Kick & Fennick’s level design and puzzles were enough to keep my attention for hours on end.

You take on the role of Kick, a little blonde kid who awakens in some sort of post-apocalyptic world that looks suspiciously like the setting of Portal 2. He’s caught in what appears to be a dilapidated laboratory, invasive vines and other foliage snaking throughout, and then pairs up with Fennick, some floating robot thing with a busted tail. That’s… pretty much as deep as the story goes. Together, Kick and robo-pal Fennick traverse a ruined cityscape, fighting foes and solving jumping puzzles with the aforementioned gigantic freaking rifle.

Gameplay is fairly straightforward: you’re given a gun, which is used to propel Kick from place to place. Tutorials are provided throughout the experience by means of widescreen monitors, although they can frequently be difficult to read. Aim is guided, allowing you to see somewhat accurate predictions of where you’ll land, and you’re able to fire your weapon twice before helplessly falling out of the sky. This mechanic requires some very interesting planning on your part, as you’re forced to perfectly time sequential shots while in midair. As you aim, the game slows down, providing ample time to plan your vaults.

Various obstacles stand in the way of Kick and Fennick’s vaguely-defined goal. Earlier (and easier) levels mainly sport flying enemies that can be destroyed by using the laser end of your rifle. You’ll also often encounter freaky electrical currents, which must be bypassed by timing your shots to allow you to sneak by while they’re momentarily inactive. The later (and more difficult) levels introduce even tougher hurdles, like bouncing pads and zip ramps, which might leave the impatient gamer red and flushed with frustration. One wrong move and you’re toast, which, given the precision and preparation necessary for successful long-distance leaps, means you’ll likely be attempting the same jump 20 or so times.

If you fall into a shocky death beam or are injured in some other way, don’t worry: Fennick is there to jump in and rescue you. However, he has a limited amount of energy to spend saving your irresponsible butt, so if he tires out, it’s game over. Energy-restoring Power Nodes are scattered throughout the world, with 50 findable in each stage. Additionally, there’s one Special Gear hidden in every level, and for every three you collect, you’ll unlock a new costume for your little blonde, prepubescent hero.

Kick & Fennick is pretty reasonable when it comes to its collectables. More often than not I’d find every Power Node and Special Gear on my first run through a level, though I’d occasionally become annoyed with the unfairness of certain Power Node placements. In one stage, the game’s camera adjusted itself to prevent me from seeing the level’s last three Nodes floating directly above me. Unlike other games with an emphasis on collecting (Yoshi’s Woolly World, for instance), you do not retain collectables gathered on previous playthroughs. If you missed a Power Node the first time around, you’re gonna have to find them all again.

The game is divided into several chapters, with each consisting of some number of levels. At the end of each chapter, you’re faced with a boss fight. None of these are particularly difficult, but do require mastery of puzzle solving and the mechanics introduced in that chapter.

Kick & Fennick was first released for the PlayStation Vita last year, making the Wii U version a port of the original — a fact that’s made abundantly clear once you boot it up. In-game textures and models are low quality, menu icons are blurry and everything just looks kind of… eugh.

With such heart and soul poured into Kick & Fennick’s platforming, it’s a shame to see that creative energy painfully absent in most other areas of the game. The futuristic setting seems like it would serve as the perfect opportunity for the creation of some really imaginative environments, but Kick & Fennick looks exactly the same from start to finish. The seemingly war-torn world appears desperate for some context, and, while the soundtrack isn’t terrible, it’s largely forgettable and easily unnoticeable when playing.

All things considered presentation-wise, Kick & Fennick is a breeding ground of story and setting potential that’s, sadly, all but completely wasted.

After downloading this game with a figurative blindfold on, I came out relatively pleased with the whole experience. Kick & Fennick is a fun, fresh take on a platformer and is arguably quite challenging once things really get going. Unfortunately, it completely fails to achieve both a compelling setting and narrative. Environments are bland, ugly and uninteresting, music is characterless and any expectations of a satisfying explanation to the weak story’s premise are totally dashed.

If you’re looking for a fun way to pass six or seven hours and you’ve always dreamed of playing around on an extreme pogo stick that’s actually a semi-automatic rifle, you should definitely consider dropping the $10.49 for Kick & Fennick. 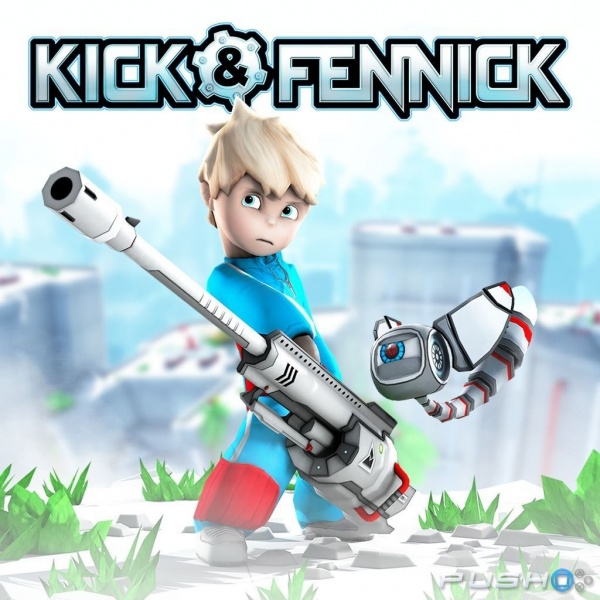