The witching hour was upon us all, with Bayonetta clocking in as the final fighter for Super Smash Bros. for the Wii U and 3DS. It was announced that she was the number one most requested, realizable character from a worldwide perspective, allowing Nintendo to bring the stylish, sexy fighter to the Smash roster. A lot was revealed about her so sit back, relax, and let’s take it from the top.

Super Smash Bros. Director Masahiro Sakurai was quick to show that Bayonetta is stunningly true to form, displaying the trademark swagger and power, as well as the original series’s technical, combo based nature. The majority of her normals and specials hit multiple times and allow for lengthy strings of attacks, though Sakurai was quick to note that the start up for her combos are a bit slow. With proper planning and an eye for openings Bayonetta can manage to bring plenty of damage to opponents and look incredible doing it.

Utilizing the four guns she wields, Bayonetta is able to follow up any attack with a hail of bullets by holding down the button. These function similarly to Fox’s laser, hitting quickly with no stun and low damage. That said, they are a great tool for securing K.O.’s, as the individual bullets are still attacks from Bayonetta. She can weave these bullet sprays into her combos as well, securing even more damage. 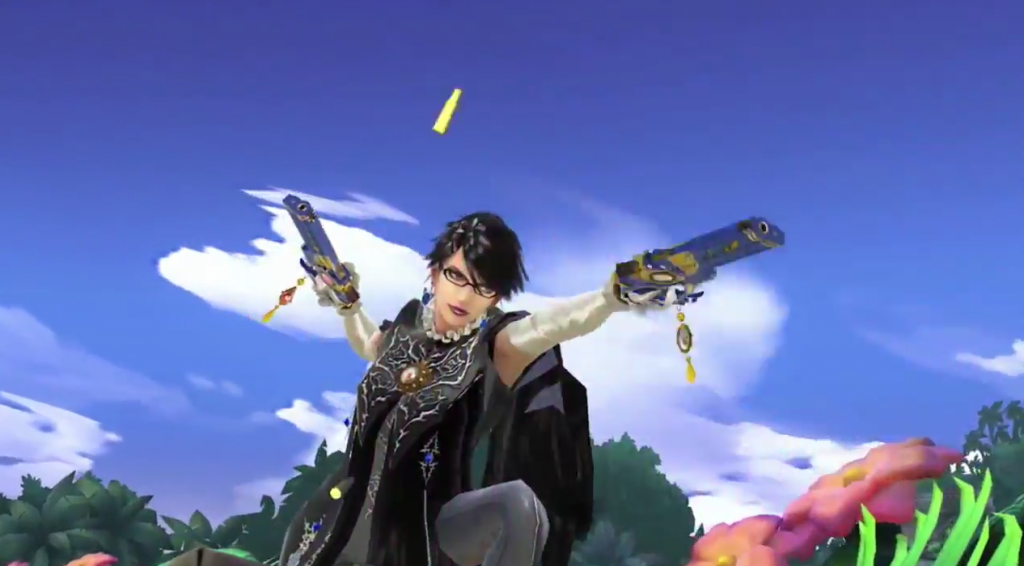 Speaking of weaving, it wouldn’t be Bayonetta without her Wicked Weave moves, which make an appearance here as her Smash attacks. Each direction calls upon the limbs of Madama Butterfly to send foes flying. The Down Smash in particular received a lot of focus, taking the form of a high-heeled stomp that can spike ledge-grabbing opponents. Her character model changes to reflect the use of her hair, showing that even in the world of Nintendo nothing can stop Bayonetta from showing her stuff.

This brings us to Witch Time, the bread and butter of her series’ combo system. Functioning similarly to a counter attack, this down special allows Bayonetta to dodge attacks and slow down enemy fighters that attempt to strike during its window. Unlike in her games, only the enemies attacking her at the time are slowed down. The more damage they have, the longer they are slowed, allowing Bayonetta the opening to start a combo on undamaged foes and bring the climax to those more fully stunned. If the timing is off, Bat Within will be performed instead, allowing Bayonetta to reduce the amount of damage taken and move to safety. It appears to be usable multiple times in succession, allowing her to dart around her enemies while attempting to find a chance to combo. 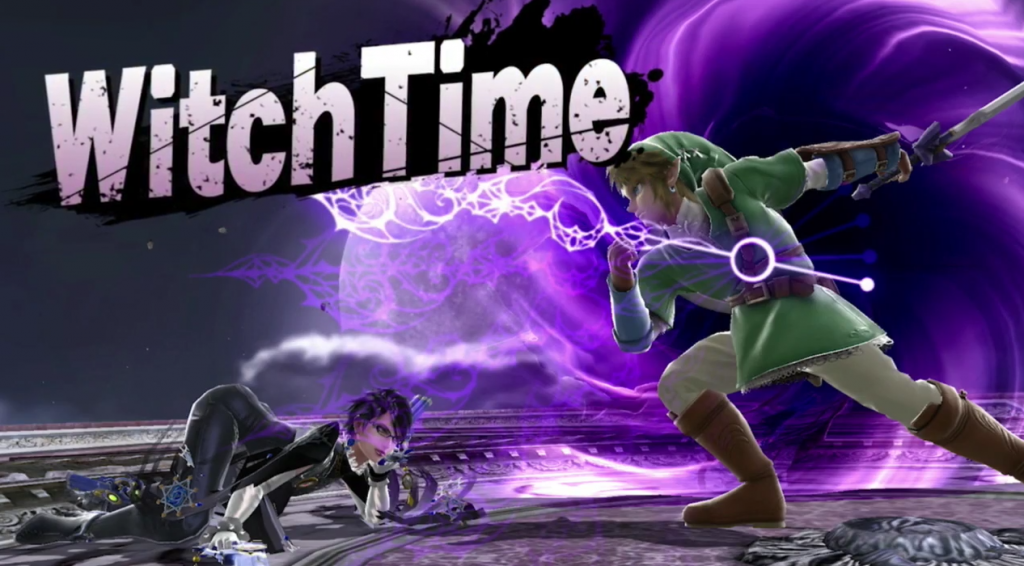 The rest of Bayonetta’s specials are just as lovingly detailed as Witch Time. Her standard, Bullet Climax, allows her to fire bullets at a slightly upward angle. The move features two animations: one for firing from the hands and one from her feet. They appear to be identical at this point but keeping them both in is a testament to the detail of her inclusion. These are more powerful than the shots she can fire after her normal attacks, actually stunning opponents. They can also be charged for more damage and a stronger impact.

The side special is actually two attacks: Heel Slide and AfterBurner Kick. When used on the ground she will slide forward, low to the ground, potentially dodging projectiles. A kick can be added to the end of the attack to launch enemies upward. When airborne, the same input allow for a leaping kick that can be immediately followed up by another, and if you hold down while in the air before inputting the move she’ll instead kick downward. Sakurai likened the input to Ryu’s Hadoken: a quarter circle forward motion followed by the button input.

Bayonetta’s up special, Witch Twist, allows for multiple uses in the air. By using Witch Twist, jumping, and then Witch Twist again, she can gain a lot more vertical distance while damaging opponents surrounding her for nearly the whole ascent. If recovery isn’t a priority then aerial attacks, including the AfterBurner Kick, can be done between Witch Twists for impressive aerial combos. The more combos you deliver the longer the recovery on the ground, however. That said, the recovery move does not put her in a helpless state, even after a long combo (from what can be seen so far), making it all the more unique in the world of Smash.

It wouldn’t be Bayonetta without as much visual flair as possible, and she brings it in spades. From the magic circles accompanying the majority of her attacks, the butterfly effects of her jumps and landings, the rose that falls when she’s hit, and even (in the Wii U version) her shadow appearing as Madama Butterfly; every aspect was designed to suit her fully. This includes a lengthy, cancelable taunt of her dancing, something she does a lot of in her games. Like certain other fighters, Bayonetta comes to the fray with two costumes: the blue, short haired costume of the second game serves as her default appearance, while her original look, “A Witch with no Memories,” is available as an alternate option. She also comes with a color option resembling Jeanne, her rival, sporting a red outfit and white hair. 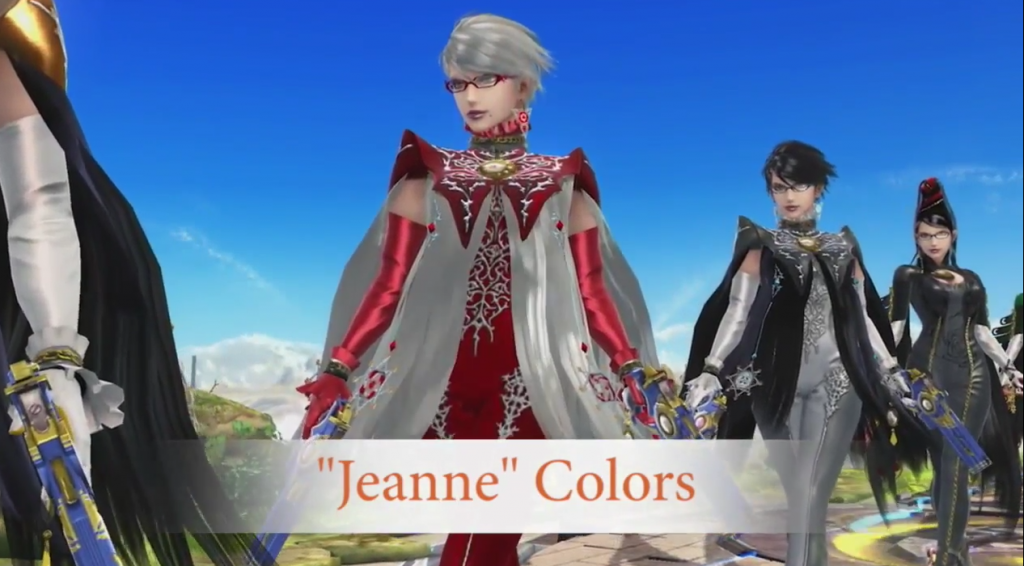 No fighter would be complete without a Final Smash, and Bayonetta’s is fittingly enough the Infernal Climax. Upon activation the entire screen will go into Witch Time, allowing Bayonetta to attack at her leisure and build up a special meter in the lower center of the screen. When maxed out she will summon Gomorrah. This demon will then lunge for any opponents hit during Witch Time: if during this an enemy’s percentage goes over 100 percent then it’s a guaranteed K.O. for Bayonetta. She can hit multiple enemies at once too, making this potentially devastating when percentages are high in free-for-all battles.

With a new fighter from a new series comes a new stage with new music. Bayonetta’s home field will be the Umbra Clock Tower; the falling debris of a clock tower with constantly shifting platforms surrounding the main stage, the clock’s face. It’s straight from the opening of the first Bayonetta, capturing the over the top nature of the game. As it falls it will shift in and out of Purgatorio, allowing for cameos of angels from the series, such as Inspired and Fortitudo. Umbra Clock Tower also features a great mix of Bayonetta songs. Coming from both the first and second game, as well as original arrangements for Smash Bros., it’ll be a treat for the eyes and ears when this stage hits. 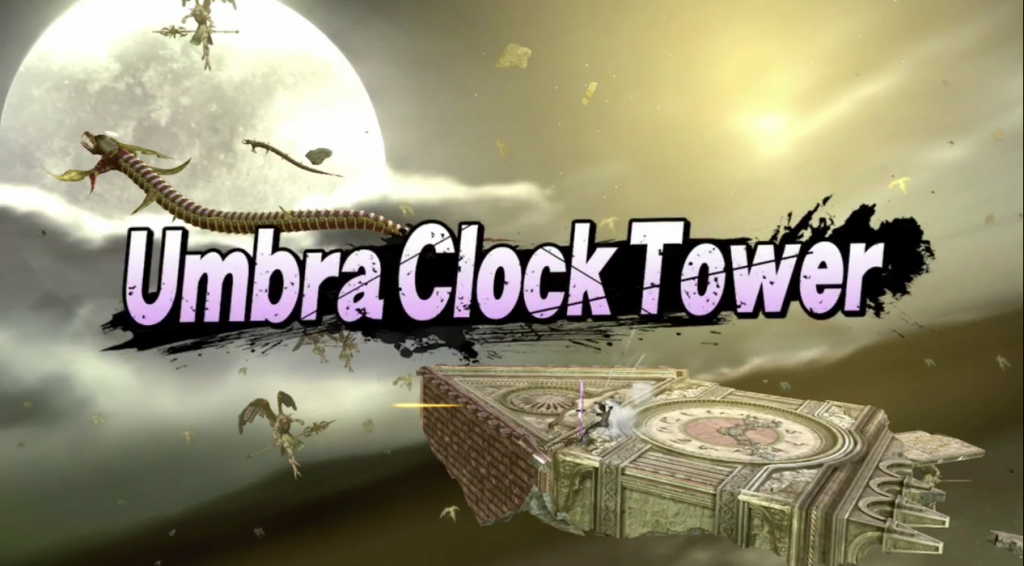 Players will also be able to expand their trophy collection even further, with Bayonetta being joined by Jeanne, Rodin, and Cereza. These all look as spectacular and faithful as Bayonetta herself and are sure to please fans.

Bayonetta’s challenge artwork deserves special mention as well. Illustrated by Eiji Funahashi of Platinum Games, it showcases a good portion of the roster engaged in a battle of light versus dark, with Bayonetta front and center. Add in the fact she is guaranteed to receive an amiibo along with the other revealed characters and it’s a fitting climax to Super Smash Bros. for the Wii U and 3DS. Bayonetta and all of this content should all be arriving in February 2016, with details to come closer to the date. Stay tuned to Nintendo Inquirer for all the latest updates.