Splatoon will soon be turning one month old, and Nintendo plans to mark the occasion by releasing a new software update. The company has revealed on its support website that Splatoon will be upgraded to version 1.3.0 on June 30th. This update will serve the twofold purpose of preparing for the upcoming Splatfest event on July 4th and tweaking a few other things to help balance the game.

Regarding Splatfest, if the search for players takes too long and the teams are unbalanced, members of the same team will be able to battle each other. Players will still earn Splatfest points for these battles, but they won’t affect the overall Splatfest standings. Also, in order to reduce strain on what will most likely be overtaxed servers, some players will be able to start playing up to five minutes before Splatfest officially kicks off. The update will also affect how many Super Sea Snails are awarded to players on the losing team if they’ve reached one of the top Splatfest ranks. 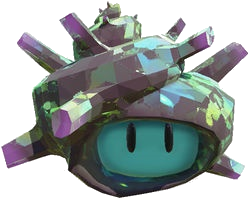 The balance adjustments will directly affect how a few of the special weapons and abilities will function. When players use an Inkstrike, the amount of turf covered will now be kept consistent, no matter what part of the arena it hits. Players who take damage while using the Kraken will also be knocked back further now. As for abilities, Inklings with Ninja Squid won’t be swimming around as quickly; and likewise, those using Stealth Jump will take longer to actually execute a Super Jump. Lastly, the actual effectiveness afforded by the Ink Resistance Up ability when moving through enemy ink will be adjusted, though whether it’s for better or worse is something we don’t know at the moment.

There are a lot of adjustments to look forward to, but specifics will have to wait until the update goes live this Tuesday. As should be expected, Splatoon players will need to download and install the update before they can play online. Until then, players can get to practicing with the new weapons in anticipation for Splatfest.