Mario Kart 8 DLC has raced into our hearts & homes

There’s no denying the massively wide appeal of Mario Kart 8 for the Nintendo Wii U. It was the fastest selling game in the console’s short history, selling 1.2 million copies in the first four days of its release. Currently, it remains the best-selling game for the Wii U, and thanks in part to Nintendo’s continued support of the game, Mario Kart 8 continues to stay relevant and appealing in a very cluttered gaming landscape a year after its release.

While various patches have improved gameplay and added additional content for free, like the unthinkably fast 200cc mode and the new amiibo support, the biggest reason Mario Kart 8 continues to bring back gamers has to be the inclusion of the two DLC packs. The first DLC pack was released in November of last year, with the second one released last month (ahead of the original schedule set by Nintendo). DLC felt like new territory for Nintendo when it was first announced for Mario Kart 8. Despite the uncertainty of how well the developers would deliver their promises to include a large volume of new content to the game, the thought of continued support for it was enough to generate a healthy hype for what was to come.

The two DLC packs cost $7.99 each, but bundling them together brings the total price down to $11.99. Both packs add three new characters to the roster, four new vehicles and two cups. Each DLC pack also includes eight new tracks total. That’s 50% more tracks to race on if you buy both DLC packs. I’ve got to admit: it’s an incredible value. All that new content added to a full retail game is a deal I wouldn’t be able to pass on myself.

The first DLC offered was the Legend of Zelda pack. Link was made a playable racer for the first time in the game’s history, as well as Tanooki Mario and Cat Peach. Also included were eight new colors for Yoshi, for those racers out there who prefer their dino companion in different colors. Out of the four new vehicles, the two most notable rides were the Master Cycle (themed for the Zelda franchise) and the Blue Falcon, straight from F-Zero. Both are extremely sleek in design and a blast to ride no matter what character I’ve used, furthering my belief that Nintendo did not disappoint with its new content. 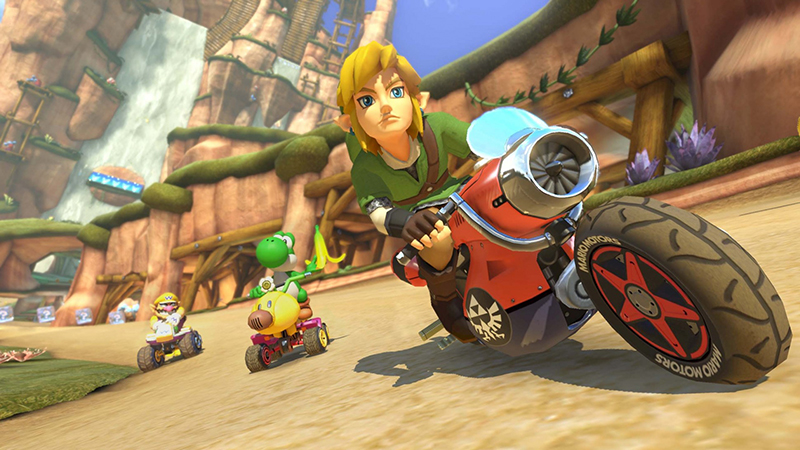 The two cups, the Triforce and Egg cups, each provided four additional tracks, two of each were brand new and two were rebuilt tracks from previous Mario Kart games. Mute City is featured in the Egg Cup, making F-Zero fans clamor even more for a new game in that franchise. An Excitebike track is also in the Egg Cup, which is actually randomly generated and different each time you race on it. Finally, the Hyrule Circuit track is in the Triforce Cup, and it serves as a perfect representation of Hyrule Kingdom in the form of a race course. Every detail is carried out perfectly, doing the Legend of Zelda franchise justice in this Mario Kart track. Even the coins are transformed into rupees, which I find to be a brilliant touch.

The second and most recent DLC addition is the Animal Crossing pack. Two versions of the Villager can be selected (boy or girl), as well as Isabelle and Dry Bowser. Oh, and if you like your Shy Guys a different hue, you can now shuffle between eight new colors. A couple of vehicles are based on the Animal Crossing game, including one kart and one bike.

The two cups in this DLC pack are the Crossing Cup and the Bell Cup. Several fun tracks are featured in each cup, but the crowning achievement of the entire DLC pack has to be the Animal Crossing track, which was crafted beautifully to resemble an Animal Crossing town. Better yet, there are four different seasons of the same track which are randomly selected each time a race begins, meaning one race may be summer and the next might be winter themed. Admittedly, discovering which season I’ll be driving through once I select the track adds an extra ounce of fun to racing. 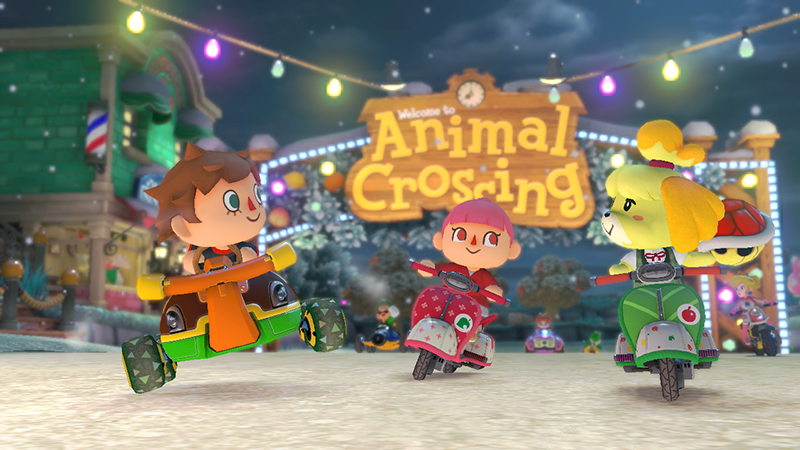 While there isn’t any additional DLC announced for Mario Kart 8 at this time, the critical and seemingly commercial success of these two packs might at least warrant a conversation about bringing more new content to the game in the future. These two packs, especially for the bundled price, should be considered a must-buy for any owner of Mario Kart 8. All this additional content, along with the new 200cc mode that was patched in for free, are sure to keep Mario and his racing buddies relevant long after their one year anniversary.

The team’s first impressions of the DLC

Jason and Lauren from the Nintendo wire and Amiibo News team gave the two Mario Kart 8 DLC packs a test drive soon after the bundle was released. Check out their reactions to all of the new content below!