For as much as Nintendo loves to gush over its games that are exclusives to one of its systems, it certainly likes to pull some fast ones and surprise people just as often, it seems. Despite the Pushmo brand unofficially developing into a franchise with the third game, Pushmo World, one would have assumed that the next game in the series would be hyped up and talked about before its release. But you know what they say about making assumptions, especially about Nintendo: “Don’t.”

When the eShop updated on Thursday, May 14, an unexpected title was offered up to 3DS owners without any warning or hints beforehand. Stretchmo, which is now the fourth game in the puzzle game franchise, was launched into the wild with the whopping price tag of $0.00. That’s right, Stretchmo was a completely free download, raising even more eyebrows than the appearance of the game in the first place. For those who thought it was too good to be true, well, they were right in a certain sense, but only on the surface level.

Stretchmo is indeed a free download, and it’s also definitely a free-to-play game. With the initial download, you’re given seven levels/puzzles to solve before the sales pitch is handed to you. As the name of the game implies, it’s different from the Pushmo games in the sense that now, for the first time, you can push and pull the blocks front to back, and side-to-side. The bigger the puzzle, the more complex it gets as you try to figure out how much certain blocks need to be pushed and pulled from all directions. The free seven levels are not the least bit challenging, as they serve as a tutorial for the game. If it was just a regular download title, these first seven levels would be exactly the same, teaching you the new mechanics as they go. For me, the last free level felt like something more entirely, almost as if it was acting as a final marketing push to ask players for money. Upon completion of the tutorial, players are given the choice to buy content packages in order to add more to the game.

There is one $5 pack that comes with 100 puzzles, and three $3 packs that each come with 50. Every pack seems like it will have radically different puzzles, whether it be the shapes or the overall mechanics built in. For those interested in buying all four, Stretchmo will give you a discount for bundling, dropping the price down to $10 for all 250 additional puzzles. For those folks not interested in paying anything, you can always go back and play those seven levels over and over again, but that won’t last long. 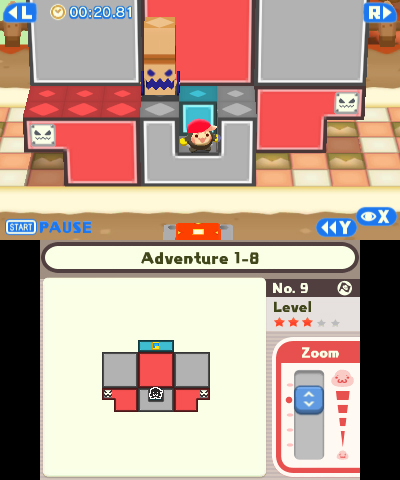 Stretchmo seems like the only natural evolution the Pushmo franchise could make, although with Nintendo being stealthy with its release, one can only hope that the interest level for this game doesn’t feign even a little bit. Whether or not that $10 investment is worth it remains to be seen, but hats off to Nintendo for surprising all of the fans out there once again and attempting to reinvent the wheel it created in the first place.