In an announcement back in March, Nintendo announced a partnership with DeNA that would bring beloved Nintendo franchises and characters to mobile devices, i.e., smartphones and tablets. While the news may have rocked the gaming world, it really shouldn’t have come as a shocker, considering the gaming giant has been positioning itself to partner with mobile gaming developers and games for longer than it may seem.

The perfect example is the Puzzle & Dragons franchise, which may have started out as a mobile game, but made the transition to the handheld gaming market in Japan in 2013, courtesy of Nintendo and the 3DS. The original Puzzle & Dragons game was wildly popular, winning multiple awards for its design as a game, rising to the tops of download charts with numbers up over 30 million, and bringing in over 2.5 billion dollars in revenue with microtransactions. However the partnership came to be between Puzzle & Dragons developer GungHo Online Entertainment and Nintendo, it did, which brought the spin-off Puzzle & Dragons Z to the 3DS late in 2013, in Japan only.

Fast forward a year and a half, as North America and Europe are finally getting the Puzzle & Dragons Z game, only now with an added bonus. Also released in Japan just last month was Puzzle & Dragons: Super Mario Bros. Edition, which is a completely separate game (though extremely similar in style). On May 22, North America and Europe will get not one or the other versions of the Puzzle & Dragons game, but both games for the 3DS in a nifty 2-for-1 bundle. Even better is the price, which retails for $29.99, as opposed to the typical $39.99 price point of most 3DS titles. 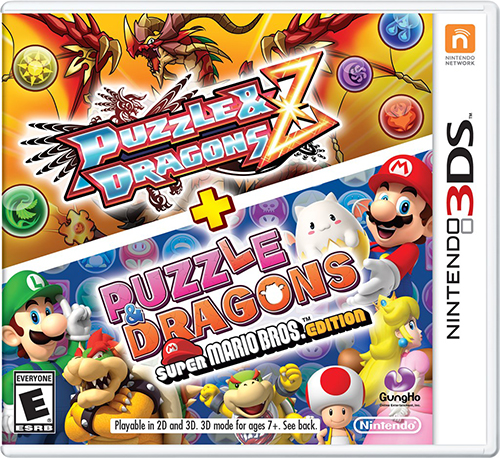 So what is Puzzle & Dragons Z, and how did GungHo transform that game into a Mario game? Well, the premise is as simple as the genre it’s classified under: puzzle RPG. Essentially, it is a match three type of game where you move colored orbs around the board in order to match colors, explode the orbs, and make new ones drop from the top. The catch is where the RPG portion of the genre comes into play, as every move you make in order to match colors triggers the attacks of the monsters you have on your team. Your team consists of different types of monsters, with different abilities, many of which can only be used by correlating the correct colors. Match up the right colors with the right combos at the right time, and watch your team decimate their enemies.

The strategy is moving your orbs around to not only match them up, but set up bigger, more powerful combinations that will deal more damage to tougher foes. Along the way you can also recover health, as the enemies on screen will not take a beating without fighting back. Any lull in action will provide the challengers with enough time to attack, and when unprepared for an onslaught, the results can be fatal.

The Super Mario Bros. Edition of this game, which again, you get in addition to the Puzzle & Dragons Z game, plays almost exactly like the proper game. The only real difference is the Mario Bros. skin that is laid over the game, transforming the characters, the enemies, the items and the settings into familiar Nintendo creations. On the surface it appears that this spin-off of the Z game is merely a way to introduce an audience who is skeptical of this genre or type of game by using recognizable characters and names. At the same time, it also acts as yet another Mario story, so at least it feels fresh and unique. Then again, Princess Peach is in need of being rescued, so the terms “fresh” and “unique” are used extremely liberally. 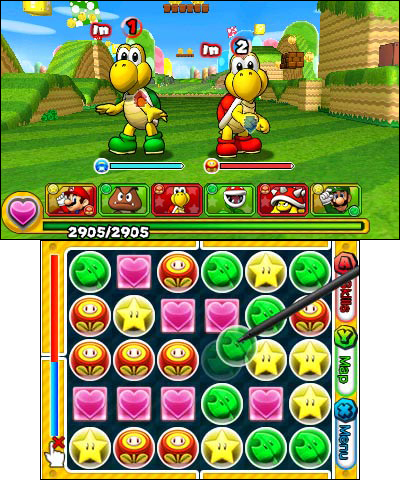 There is no multiplayer or online leaderboards for this combo package of games, although Nintendo is known for revisiting successful games and patching in new content, if the demand is enough. Even if these two games are untouched and remain as-is, the deal of receiving two games for essentially the price of one should be enough to at least make gamers take notice. Better yet, there is a free demo available on the Nintendo eShop for the 3DS, which allows the player to try the tutorial levels of Super Mario Bros. Edition, as well as a much harder set of levels which throw the player out there to learn the game on the fly. Despite there being no demo for the Puzzle & Dragons Z game, this free offering was obviously intended as one final push to get the games some attention in the handheld marketplace.

Puzzle & Dragons Z + Puzzle & Dragons Super Mario Bros. Edition releases in stores and digitally on the eShop, exclusively for the Nintendo 3DS on May 22. Yes, it looks like a mobile game – because that’s where these games’ roots are planted – but don’t let appearances fool you. This is an insanely popular and profitable franchise, and Nintendo is hoping to use this as a bridge into the mobile gaming space before jumping completely in.