The beauty of Yoshi’s Woolly World

Yoshi is back on home consoles for the first time since 1997, and Nintendo is once again using a unique art style to offer a fresh take on a historic franchise. On the heels of other similar offerings like Paper Mario, The Legend of Zelda: The Wind Waker, and most recently Kirby’s Epic Yarn, Nintendo will be releasing Yoshi’s Woolly World to Nintendo Wii U systems this year.

Each level of this side-scrolling adventure features your typical Mario bad guys like Shy Guys, Piranha Plants and more, but recreated in a wool design all stitched together in a basic, yet brightly, detailed environment. Yoshi’s Woolly World uses the same classic Yoshi mechanics in previous Yoshi titles that give players control over his versatile tongue and flutter jump. Among all of the older beloved Yoshi features is a fun new tweak styled to fit this newest installment’s theme: Instead of swallowing items and enemies and transforming them into eggs, he now uses them to create balls of wool. These balls of wool then can be used to tie up enemies, create platforms to advance in the level, and more.

In addition, a new mode is brought to this Yoshi game: Mellow Mode. Mellow Mode will change your Yoshi character from using his flutter jump to controlling a winged Yoshi. You hold down a button and the winged Yoshi will hold steady at that height level. This allows you to get a little bit of help if you’re stuck in the game, as it can be switched on and off at any point in the level.

Local co-op multiplayer is present in Yoshi’s Woolly World even if you don’t have another person there with you to play.

If you have a friend or family member who wants to play with you on your console, that person can pick up a Wii Remote and play alongside you in the game, helping you battle through stages. You can even swallow the other player and fire them out as a weapon to defeat enemies.

If you don’t have another player nearby, you can also scan in a Yoshi amiibo. Doing so will allow you to control both players using the Wii U GamePad, giving you some extra help.

Speaking of amiibo, there’s a dedicated line of amiibo getting released alongside the Yoshi Woolly World title. Three yarn Yoshi colorways are available for purchase: green, blue and pink. These amiibo are easily the largest in size to date. And if that wasn’t enough to make them stand out against all other amiibo, the fact that they were crafted in a way that makes them resemble Hacky Sacks surely will garner extra attention from collectors.

Nintendo is allowing you to use some other non-Yoshi amiibo like Mario, Luigi, Peach and other characters to unlock special Yoshi designs. Designs will vary based on the character. The full roster hasn’t been announced yet, but we should get more information from Nintendo closer to the launch. So stay tuned! 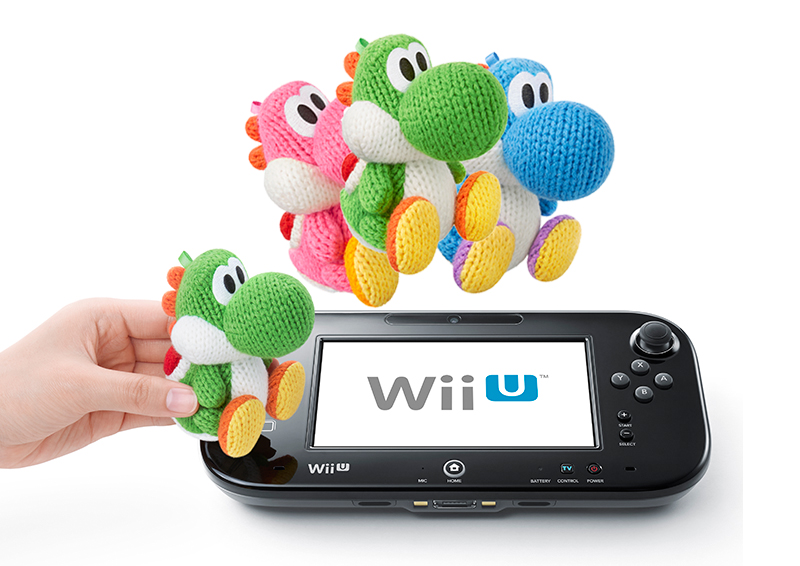 Yoshi’s Woolly World is set for release in Europe on June 26th. No announcement date has been announced yet for Japan or North America outside of being released “later this year.”