As much as The Legend of Zelda series tells stories that champion good overcoming evil, failure and despair are also part and parcel of the franchise’s lore, and sometimes the villains’ triumphs and the hero’s failures are just as compelling as Link saving the day. Zelda games can go to very dark places depending on the player’s actions, and canon or not, there are many game-ending events that can leave an impressionable impact. The following list, compiled specifically to ruin your day, consists of 10 scenarios where Link met the most terrible of fates.

“Guess what? You got it for free. Are you proud of yourself?” reads a dialogue box on my Game Boy screen after I just had Link skip payment and walk out the door with a 980-rupee bow in Link’s Awakening. “Why, yes I am!” I think to my young self, pleased to no end that my casual robbery actually worked. As I continue my adventure, I quickly discover that all NPCs have abandoned the name “Reece” in favor of “THIEF.” Not too keen on my newly acquired criminal reputation instantly spreading across the island of Koholint, I guiltily stepped back into the store to see if I could reverse my actions. Big mistake. 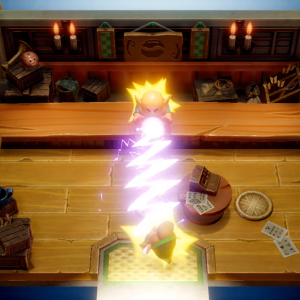 The shopkeeper stands before Link as he re-enters the store, warning him that he’s about to pay “the ultimate price” as the boss theme music plays. Out of nowhere, the man blasts Link with a ferocious beam of electric energy, killing him instantly. This scenario can also play out in the 2019 remake, and this time, the shopkeeper sports a furious demeanor as he’s zapping our hero. It begs the question: Being labelled a “THIEF” may be embarrassing, but is it a fate worse than death? Probably not, if this is how Link kicks the bucket.

9) Breath of the Wild: Ragdoll style

It’s no exaggeration that I’ve seen more Game Over screens in Breath of the Wild than in all other Zelda titles combined, but at least the game keeps Link’s many inevitable demises interesting by being the first to introduce ragdoll physics. A perfect example of this is the following clip from HelixSnake. Setting Link on fire before having him jump off the steepest cliff imaginable, our hero painfully hurtles and flips towards the bottom for a whole 30 seconds, with each slam against the slope appearing more excruciating than the last as fairies keep the poor adventurer alive just to extend his suffering. By the 10-second mark, I’m already hearing the voice of that kid from The Simpsons ringing in my head. It’s almost difficult to categorize this one as “horrifying” because at the same time it’s just so wickedly amusing, like watching a Jackass stunt go way more off the rails than usual. Taken from Link’s perspective, however, it’s pretty bad – if he were to survive this, it’d take more than a hundred-year nap to recover this time.

8) Ocarina of Time: Falling in the House of Skulltula

There is one house in Kakariko Village that lacks the tranquillity and quirkiness of all the others: the House of Skulltula. Here, Link can encounter members of a rich family that have been transformed into the skittering, spider-like Skulltulas. They eerily descend from the ceiling, begging Link to help undo the curse and make them human again. Seeing their disfigured faces morphed into arachnid bodies is troubling enough, but the horror doesn’t stop there. Unlike most houses Link enters, here ominous music plays, and he is free to swing his sword around. If you’re heartless enough to torture the cursed family further, you can attack them, causing them to let out chilling screams of pain. They will retaliate, however, and can cause Link damage if he gets too close. Taking damage means it is also possible for Link to die in the House of Skulltula, alone and forgotten among creatures that once resembled people – and the human/Skulltula hybrids are now presumably cursed in their grotesque state for eternity now that the hero of Hyrule has fallen. 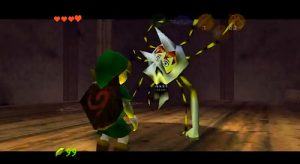 Between the nightmarish eel of Super Mario 64, the panic-inducing music of Sonic the Hedgehog, and the persistent Snacker the Shark from Banjo-Kazooie, I don’t know how I ever found the courage to set foot in a swimming pool. The Legend of Zelda isn’t a series to buck the hydrophobia trend, with few games shying away from giving Link a watery grave. As YouTube user Master0fHyrule conveniently demonstrates in his excellent compilation video of Link drowning across various Zelda games, there are a multitude of ways to fill Link’s lungs with H2O. In many of the 3D titles, swimming below the surface for too long is an obvious one, but you can also weigh the Hylian hero down with Iron Boots. It’s The Wind Waker that has possibly the most unsettling drowning animations, however, and with an entire ocean to traverse, the danger is more prominent than ever. Too much time spent in the Great Sea will cause Link’s head to gradually decline below the surface, causing him to choke and splutter until he sinks completely. A rarer death animation occurs when Link is knocked into the water right after his Life Gauge has fully depleted, causing him to struggle and flail erratically until the last of his energy gives way and causes him to sink, his limp body resurfacing face-down.

Water isn’t the only element Link must overcome across the Zelda series, of course. Unfortunately, being a hero doesn’t prevent him from being flammable, which is an issue when it comes to facing the recurring fire-themed dungeons that stand between him and saving the world. In Ocarina of Time, for example, if Link wanders too long inside the Death Mountain Crater or the Fire Temple without the heat-resistant Goron Tunic equipped, he will burst into flames as he falls to the ground. Worse still is the common obstacle of lava – The Wind Waker and Skyward Sword at least have the decency to play a comical, cartoon-like animation whenever Link makes contact with molten liquid, bouncing him back to land, but Twilight Princess doesn’t play nice. In what may be the most brutal death in the game, Link slowly and realistically sinks into the sea of magma as Midna is forced to watch.

Twilight Princess doesn’t discriminate when it comes to fiery deaths: Not only can Link burn, his friends can too if he fails to protect them. When Ralis, the injured prince of the Zora people, is denied safe passage to Kakariko Village by the Hylian guards, Telma and Ilia turn to Link for help. It’s his job to protect the wagon from the many Bulblin Archers firing flame arrows throughout the journey, and if the player isn’t efficient enough at extinguishing the flames with the Gale Boomerang, a grisly end awaits Telma, Ilia, and Prince Ralis. 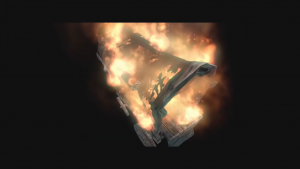 Rising from its sealed prison, Skyward Sword’s The Imprisoned slowly climbs up the spiralling pit as Link slashes its bulbous weak points in his desperate attempt to stop its doom-laden ascent. As far as design goes, it’s not the most intimidating creature – it starts off as a giant, egg-shaped blob with teeth that only looks goofier as its form evolves – but that doesn’t stop its game-ending cutscene from being anything less than nightmare fuel. As the beast tears through the final defenses, it stands before Impa — a guardian chosen by the goddess Hylia who has dedicated her thousands of years of life solely to protecting the Sealed Temple from Demise — as she utters her final, fear-filled words: “It’s too late! All… All is lost.” The scene ends with the Imprisoned opening its gaping maw, revealing its multiple layers of sharp teeth as it slowly proceeds to consume Impa and the Sealed Temple, presumably before also devouring the rest of the land. 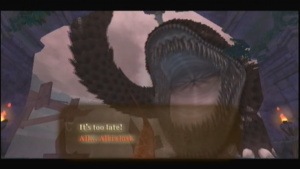 NES-era graphics pale in comparison to today’s animation, but imagination goes a long way in Zelda II: The Adventure of Link, the first game in the series to implement story-based consequences upon Link’s defeat. When Link is killed, the player is greeted with the following screen along with the sound of Ganon laughing. Being faced with Hyrule’s doom alone is dreary enough, but the manual explains just how Ganon’s return is possible. The blood of the hero is the key required in the ritual to resurrect the King of Evil, which means that his minions not only slew Link, but acquired his corpse in order to sprinkle his blood on Ganon’s ashes. Not only is Ganon free to conquer the world, but with Link gone, Princess Zelda’s curse can never be undone, leaving her in an eternal slumber. 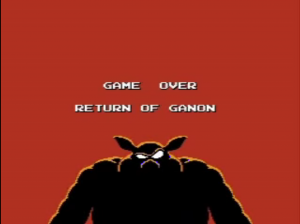 If you’ve played Zelda II, you’ve seen this screen. A lot. It’s already one of the most difficult Zelda games out there, and I can’t decide if Ganon’s constant world-ending is an effective means of motivating players to try again, or just kicking them when they’re down.

When Link restores the shattered Four Sword to its former glory in The Minish Cap, he finally has the means to defeat the evil sorcerer Vaati and undo his curse on Princess Zelda, who’s been turned to stone.

Unfortunately, Vaati, having discovered that the petrified princess is the source of the Light Force, begins a ritual to extract it from her, which will kill the princess and give Vaati godlike power once the bell tolls three times. This threat isn’t just a narrative device either; if Link fails to defeat the three Darknuts defending the door to Vaati before the third toll, a scene will play out where Vaati will reign triumphant, Link’s companion Ezlo will declare all hope lost, and Zelda will become a permanently lifeless stone statue. Since Vaati is the game’s final boss battle, it’s especially crushing to see such a morbid scenario play out when Link has come so far and so close to saving Hyrule and its princess. 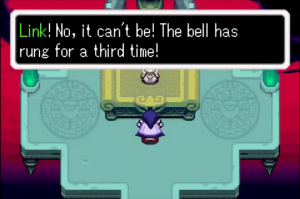 You probably knew this one was coming. Majora’s Mask is always the game that pops into Zelda fans’ minds when they think of the bleakest moments in the series, and Termina’s demise is chief among them for a reason. Should Link fail to play the Song of Time or call the giants before 72 hours pass, the Moon will finally fall upon Clock Town. The apocalyptic cinematic begins with the Clock Tower — where the game begins and where the climax should take place – crumbling to dust. The rest of the town soon follows, with its many lovable inhabitants – which players come to know intimately throughout the game’s story – left to perish. The resulting impact sends a fiery shockwave across the rest of Termina, consuming everyone and everything else in the land. This includes Link, who can be heard screaming as he is blown into oblivion. It’s truly as the Happy Mask Salesman says immediately afterwards: “You’ve met a terrible fate, haven’t you?” 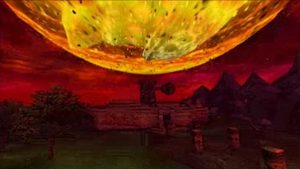 What are some of your favorite Game Overs in the Zelda series? Be sure to let us know in the comments!