UPDATE: A demo is now available on the North American 3DS eShop!

With each new game in the series dominating sale charts over in Japan, it’s hard not to be curious about the overseas sensation that is Yo-Kai Watch. Luckily, we in the West don’t have much longer to wait, with Level-5 partnering up with Hasbro and Disney XD in preparation for a late 2015 merchandising bonanza.

The 3DS game that started it all takes place in the quaint town of Springdale, where the protagonist (Nathan or Katie, depending on the player’s choice) discovers an ancient capsule machine hidden away in a local forest. They open one of the capsules and Whisper, one of the franchise’s many mascots, pops out to help explain exactly what’s going on. The friendly ghost gives the protagonist the titular Yo-Kai Watch and together they head off on an adventure to track down and catch the rogue Yo-kai lurking around the town. 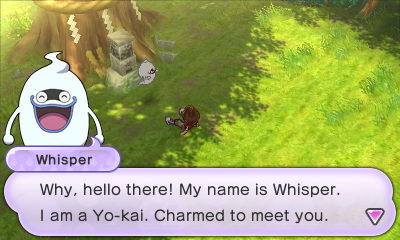 You might be wondering what “Yo-kai” are exactly, as their origins aren’t quite as universal as most video game monsters. In Japanese folklore “yōkai” is the name given to almost any supernatural entity, regardless of their appearances and abilities. One of the more well known yōkai in the West is the kappa, a turtle-like creature that’s been referenced with the likes of Kapp’n in Animal Crossing and Final Fantasy VI’s Kappa the Imp.

These Japanese influences have been obscured slightly in the English translations of the game and anime, being replaced with more westernized names and plenty of puns. (As an example, the hungry old man Yo-kai is named “Hungramps.”) Fortunately these changes seem mostly linguistic; the visuals don’t appear to have been altered at all. Even some of the more bizarre Yo-kai, like the creepy man/poodle hybrid Mangimutt, remain intact.

The gameplay in Yo-Kai Watch involves exploring Springdale and using the Yo-kai Radar to detect and defeat troublesome spirits whose antics are upsetting the locals. Once you start a battle you have to manage your party of six via the touch screen, actively cycling through your Yo-kai and activating their special moves when they’re charged up. This makes the battles pretty fast-paced, as you can quickly swap out Yo-kai that have come down with status ailments and bring in those who are better equipped elementally without much effort. 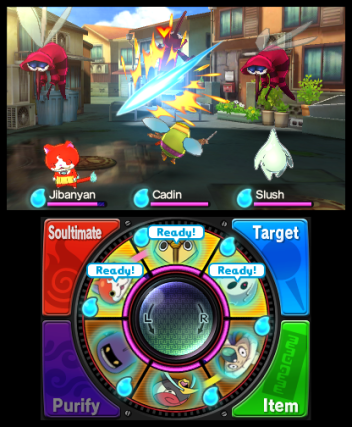 There are two methods for recruiting new Yo-kai. One option is to bribe them with food before a battle; if they like it they’ll give you their Yo-kai Medal and will be added to your collection. The other option is taking a trip to the ancient capsule machine and trying your luck with the random Yo-kai capsules. Some Yo-kai can even evolve through leveling up or through the use of certain items, meaning collectors will have their work cut out for them if they want to catch ‘em all.

It remains to be seen if Yo-Kai Watch will appeal to all ages like its most direct comparison, Pokémon. Whereas the classic monster catching franchise has a hidden depth underneath its cute and kid-friendly exterior, it’s too early to say if Yo-Kai Watch will possess a similar level of detail. We’ll be sure to take a closer look as more details and footage emerge before the game’s North American release on November 6th.