The Shin Megami Tensei series proper has held itself up with various pillars and recurring features. Gameplay systems like demon negotiation and the press turn battle system shape the gameplay, while the eternal struggle between order and chaos takes its place at the heart of their narratives. With nearly three decades of these games (and more than that if you count its Shin-less predecessor) you might worry that these aspects are getting stale. Newer spinoffs, like the ever popular and Switch-skipping Persona 5, have pushed the brand in more stylish and resonant directions while the core series has been on a break.

Now that I’ve been through Shin Megami Tensei V’s opening hours, I can speak for the gameplay and atmosphere for this long-awaited Switch exclusive. Though it’s still familiar and still dense as ever, some marked changes have pushed the non-battle gameplay into an interesting direction without losing any of the games’ recurring appeal. 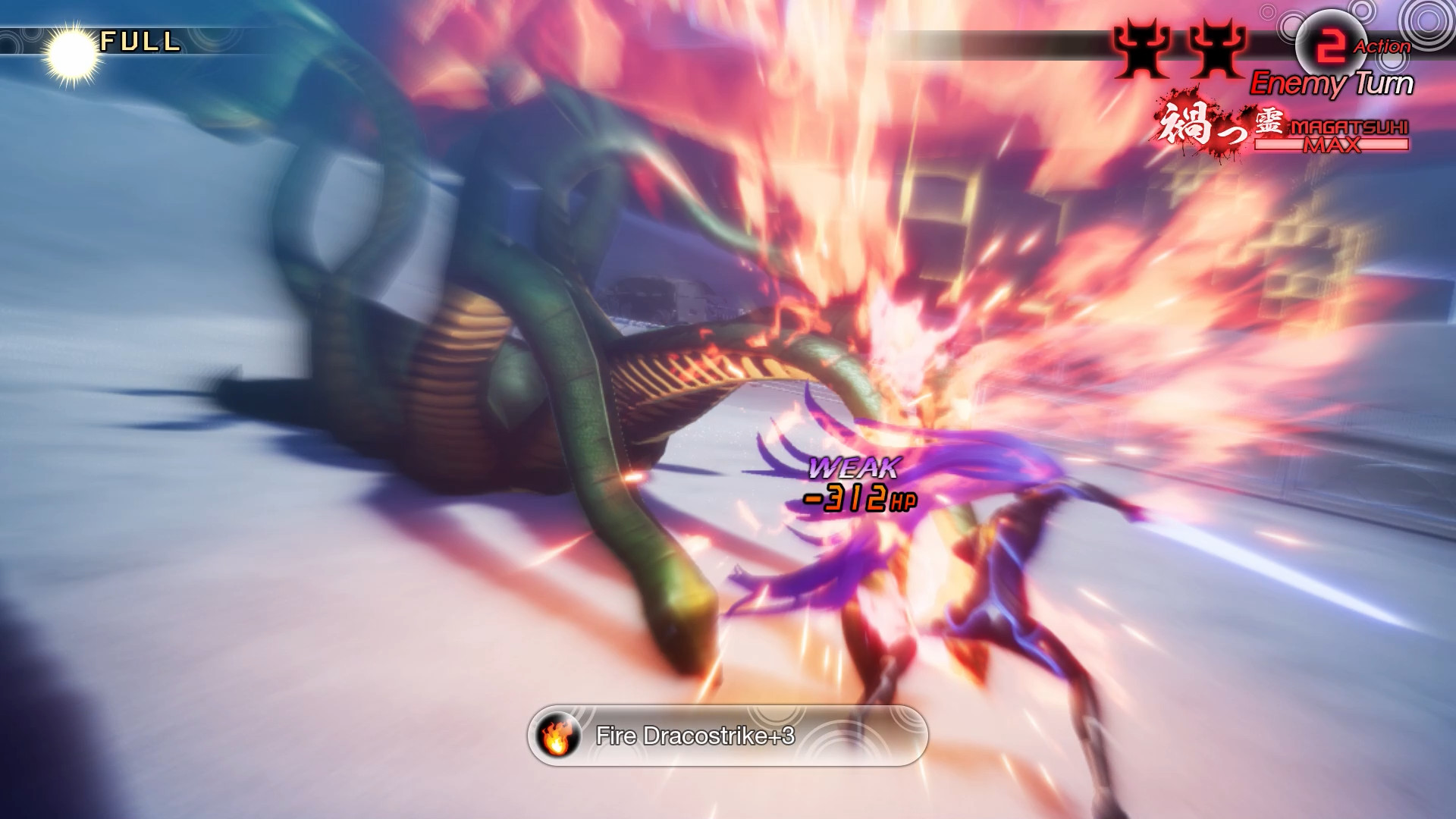 Anyone out for story specifics, I’m afraid there’s not much for you at this point. All that I’ve experienced for this preview period has been shown by Atlus themselves in the game’s promotion. Namely that you start as a typical (and exceptionally pretty) high school student that finds themselves fusing with a strange being after the end of the world has struck Tokyo. Becoming the even more exceptionally pretty Nahobino, you’re now capable of fighting off demons and mythic creatures across the sand-covered wastes that were once one of the world’s largest cities.

I’ll admit, I haven’t been a fan of the desert-like state the game brings you into. Visually it never hit me as all that interesting, but then that may be the point. It’s the end of the world, after all, and there is something to be said of navigating through toppled buildings and miles on miles of dunes. 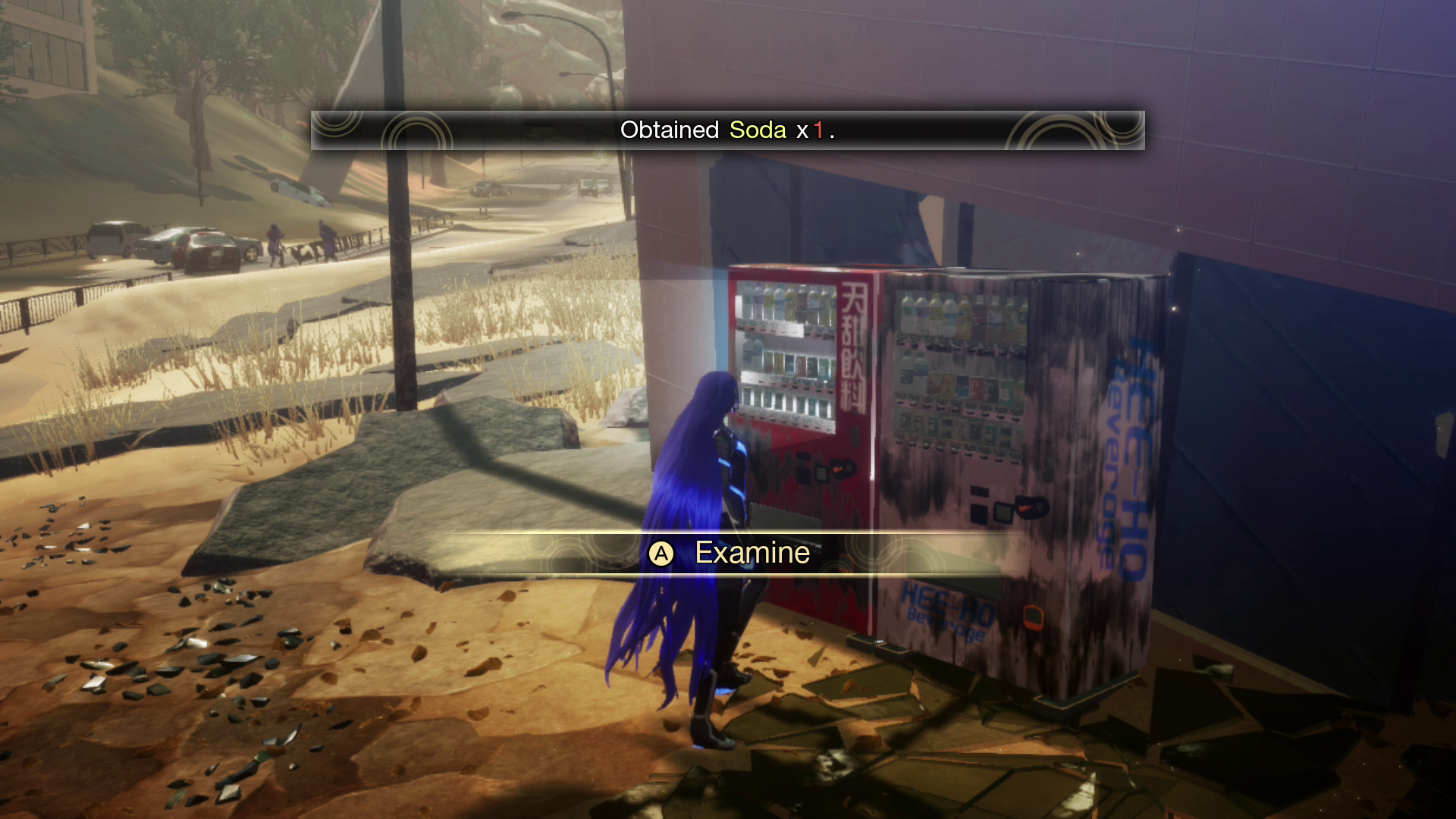 Exploration and movement in general is where Shin Megami Tensei V feels most distinct from its predecessors. The Nahobino is able to run freely through environments, which are continuous as opposed to sectioned off dungeons and chambers. Dashing along the remnants of streets and sliding down sideways skyscrapers is fast, and refreshing compared to my time with Shin Megami Tensei III: Nocturne earlier this year. The fast travel system in place is also clear and helpful, leading to less tedium in your travels.

Dotting the landscape are chests, somehow still-operational vending machines, and most curiously pickups for recovery. You can still heal yourself traditionally at any fast travel point, as well as with items and skills, but I can’t understate how much I appreciate having health and magic recovery available on the map at various points. On finding these I was slightly worried that it would take some of the edge off of SMTV, but then I got killed in my very first non-scripted encounter. Thank goodness that aspect of the series hasn’t gone anywhere.

Yes, MegaTen games are hard. Like, unforgivingly hard. You’ll think you have a handle on a situation only to find yourself completely wrecked thanks to one critical hit from an enemy that happened to target the Nahobino – who, on falling, gives you an immediate Game Over. Pretty much any other series this would be frustrating, but it would appear I’m conditioned at this point because I actually sighed in relief when I fainted for the first time. 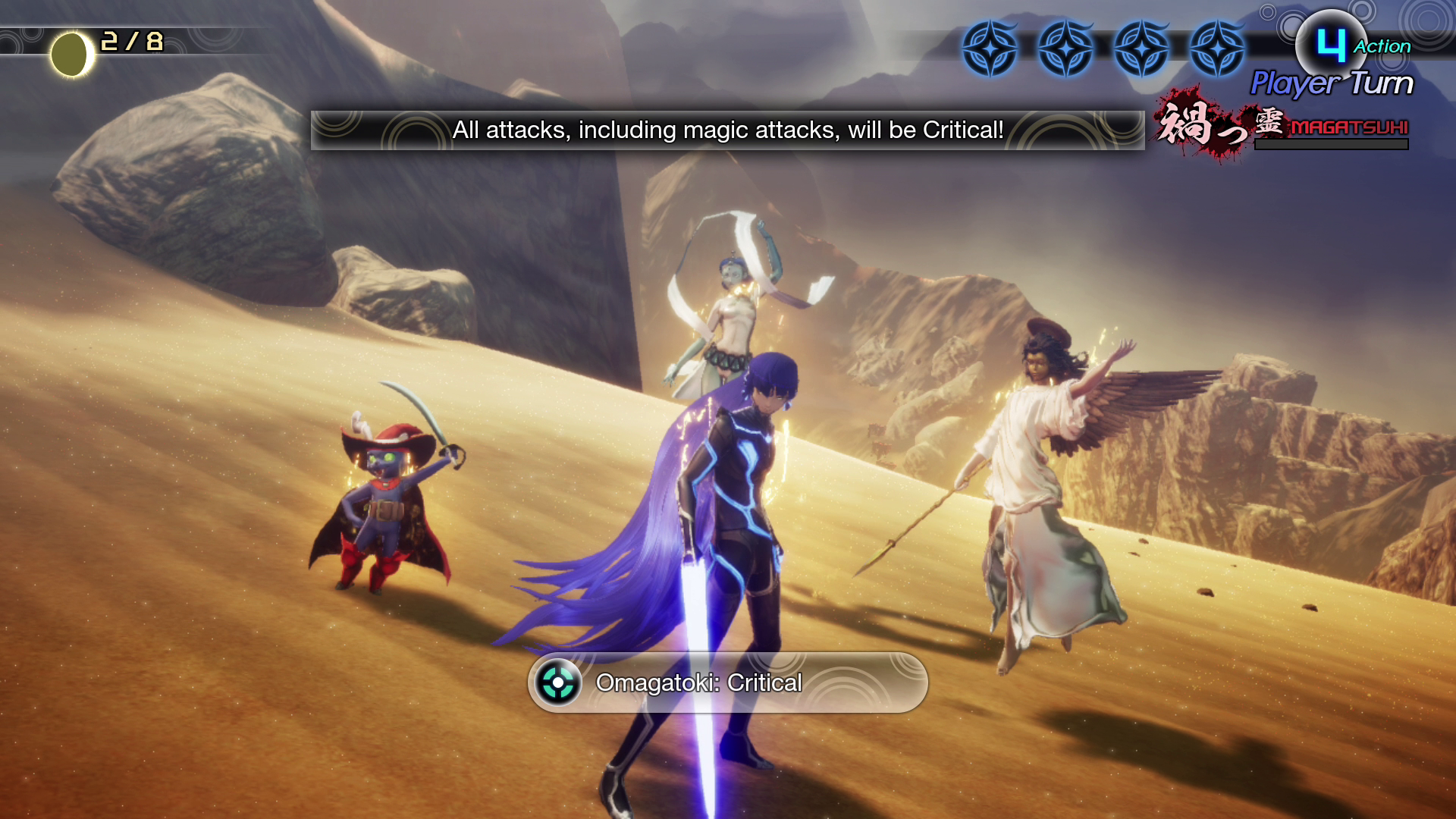 You can avoid that fate by targeting enemy weaknesses consistently, and while that can burn through your meter quickly you do have a trump card that’s new to 5. By tapping into the Magatsuhi gauge, you can activate powerful skills that give your party a much needed edge. The default of these aces up the sleeve makes it so that every hit you and your team makes will be a crit, which grants you another action – in other words doubling your actions in a single turn. I’m excited to see what else the gauge offers in the future, as that alone has been a lifesaver in tough spots, offset by its need to refill over time and across encounters.

While I haven’t encountered any bosses in the traditional sense, SMT5 did throw one tough obstacle my way. Called an Abscess, it was a massive collective of demonic energy that continued to send enemies at me as I approached. Once I made it to the Abscess, I found myself in a tougher encounter than I’d normally find at that point. Clearing this granted me access to more of the map, both in terms of where I could go and my actual map screen. I imagine this sort of approach was taken to take advantage of the freer movement in this entry, so I’m interested to see where Atlus goes with them.

While I’ve not had the chance to dive deep into Demon Fusion and other strengthening elements (like Miracles and Essences, new features fulfilling familiar functions) I have sweet talked my way to a full squad of demons. Negotiation is back and as obtuse as ever, which can really be a make or break aspect of your experience. You need to be able to work your way through cryptic conversations and be willing to part with money and items readily in order to bolster your ranks, and while there’s consistency in how demons of a given species will react there’s still no telling what talking point or request they’ll have waiting for you. 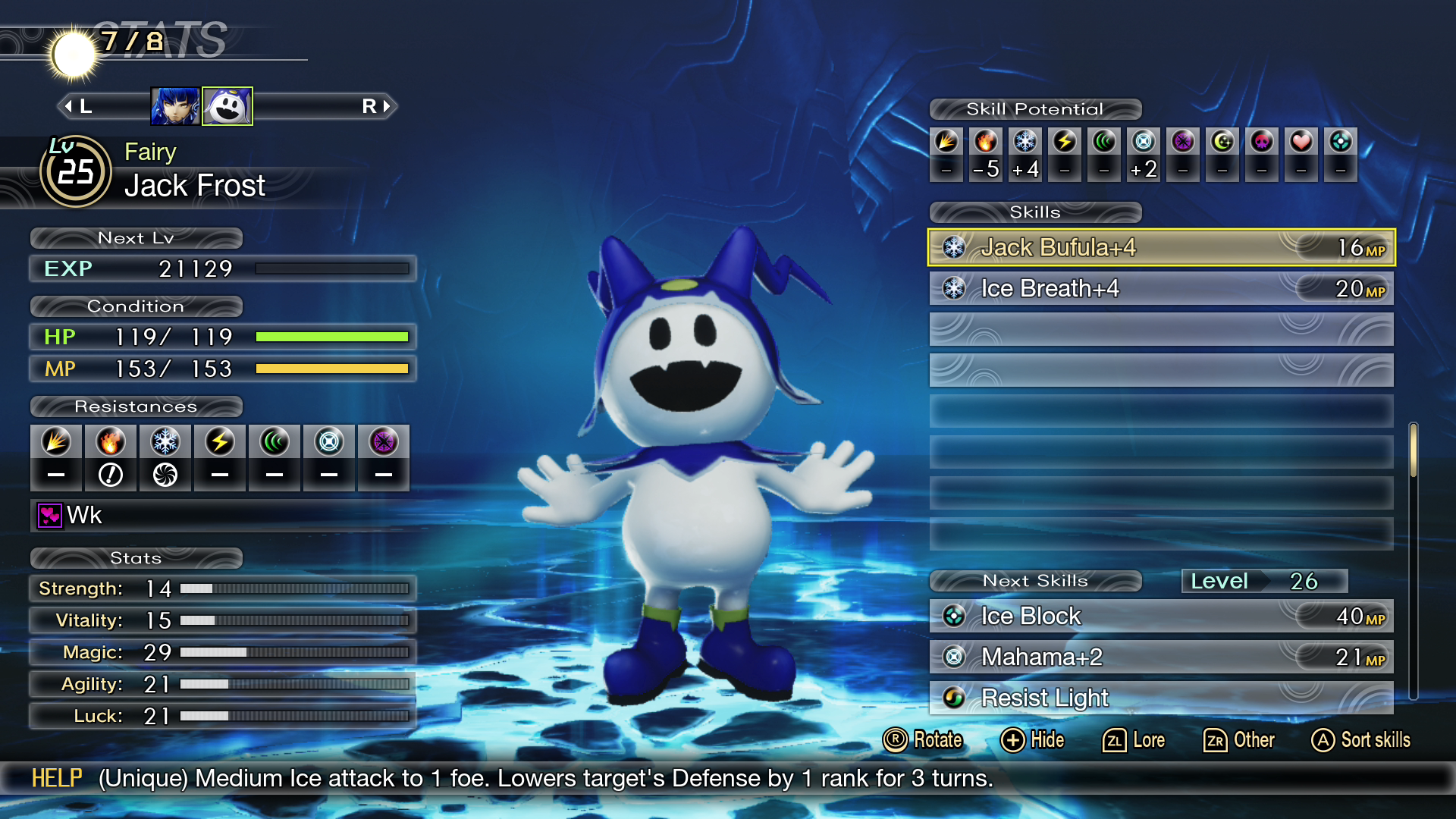 While I’m still exceptionally early in Shin Megami Tensei V, everything I’ve experienced so far is drawing me deeper. I love the cackling shopkeeper/treasure hoarder Gustave. I’m losing myself in the deep and highly customizable nature of the series’ character building. Any time I’m below full health feels like I’m walking the razor’s edge, just begging to be ganged up on by even the weakest demons of all.

Is it mostly familiar ground? Yes. But it’s familiar ground that has me anticipating how it’ll play with series conventions and expectations. I’m intrigued by the nature of my character’s partnership with the mysterious but so far helpful Aogami, which so far feels more benevolent than past empowerments. I can’t help but wonder how my group of briefly introduced classmates are faring in the apocalypse, and if they’ll have bigger parts to play in this new existence.

If this strong first impression holds, genre fans and Switch-devotees will have a lot to look forward to when Shin Megami Tensei V arrives on November 12th.