Disclaimer: This preview is based on the first build of the game when servers were extremely strained. We’ll continue to update the preview as the mobile experience smooths out.

Pokémon GO, a joint effort from Niantic and The Pokémon Company, was announced back in September of 2015, and seemed like a dream come true for Pokémon fans all over the world. The prospect of exploring the world to catch your very own Pokémon was something that many of us have dreamed about since we were small children. That dream finally seemed like it was coming true on Tuesday, July 5th, when Pokémon trainers everywhere were surprised by the unexpected launch of Pokémon GO in New Zealand and Australia. Following that release, U.S. trainers had to endure the longest 24 hours of their lives before the game finally launched in their region early yesterday evening. Now that we’re able to realize that dream through our smartphones and I’ve been able to spend a little more time with Pokémon GO, I want to take a look at whether or not this dream has actually been achieved, while offering a deeper look into the mechanics of the game and go over how exactly it all works.

One of the very first things that you do in Pokémon GO is catch your starter Pokémon. While the game itself doesn’t go into too much detail about how to catch Pokémon other than “throw Poké Balls at your target,” it’s clear that there are a few small things going on that you need to pay attention to. When you hold your finger down on the Poké Ball, a green circle contracts over the Pokémon you are attempting to catch. We know from the developer Q&A at E3 that as the green circle shrinks, the chance to catch the Pokémon grows. To throw the Poké Ball, you swipe up towards the Pokémon. There’s a fair bit of aiming involved here, which I quickly learned while attempting to capture my Squirtle at the beginning of the game. When trying to catch a Drowzee near my local grocery store, I also learned that how fast you swipe the Poké Ball is very important to how far towards the Pokémon it will travel. Think of it this way: The slower you swipe, the weaker your throw is; swipe too fast, and your Poké Ball will sail right over the head of the Pokémon you’re trying to catch. 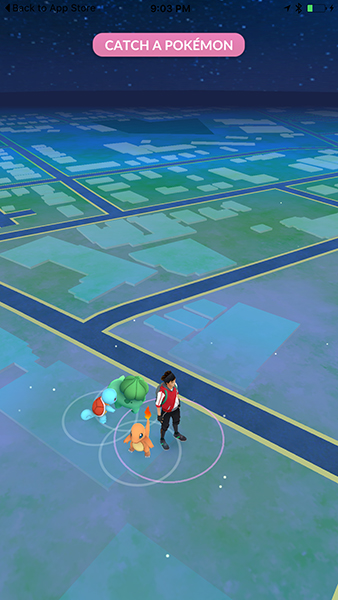 You can also use the AR mode while attempting to catch Pokémon, which uses your phone’s camera to put the Pokémon into the real world for a more immersive experience. This comes in handy with the camera feature of Pokémon GO, since you can snap pictures of wild Pokémon in real world environments, such as out on the sidewalk, in your yard, or even in your living room. This is made available by the Camera item, which is already in your pack when you start the game. The AR is really fun to use to take pictures of Pokémon in the real world, but to me it seems like it makes it much harder to aim at the Pokémon. Every time I try, I struggle to hold my phone still enough to make the catch.

In Pokémon GO, items are going to be your best friend. One of the first things you’ll be able to do after catching your first Pokémon is explore the world around you. Within your surroundings, you’re find PokéStops, often situated on or near interesting or significant public places. These public areas are usually places like historic sites or art installations. The PokéStops will open up, going from a small cube to a Poké Ball-shaped point when you are near enough to them. Tapping the Poké Ball icon will allow you to interact with the PokéStop, showing you the name and a picture of the PokéStop. You can then swipe on the picture of the PokéStop to spin it and cause it to spit out items, which you can then collect. Items include things like Incense, Poké Balls, eggs, Potions and more. These items – besides the eggs – are then stored in your pack, which has an item limit of 350 items.

You’ll need to manage your inventory wisely, especially when it comes to Potions. There are no Pokémon Centers in Pokémon GO, and all your healing must be done through the Potions you get from PokéStops. Your pack can be upgraded to hold more items, but you’ll have to spend PokéCoins in the in-game shop to do so. 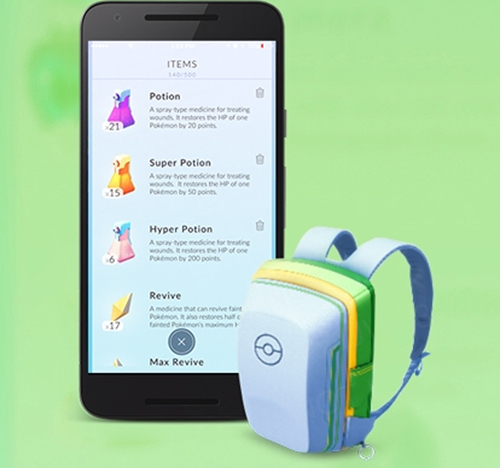 PokéCoins are Pokémon GO’s way of integrating in-app purchases into our new, Pokémon-filled world. They can be purchased through the in-game shop, and are used to buy some very helpful items. Incense (used to attract Pokémon to your exact location) is one of the most helpful items available with PokéCoins. Pokémon GO does a very good job of giving you a small taste of what these items can do, starting you off with two Incense to use, and periodically giving you more upon reaching certain levels. PokéCoins can also buy you more Poké Balls, however, I don’t really see a need for this. I’ve been catching Pokémon left and right and have still amassed over 300 Poké Balls from PokéStops alone. Other items available in the Shop are Lure Modules, which can be attached to a PokéStop, luring wild Pokémon to it for half an hour. Unlike Incense, Lure Modules work for every player in the area. You can also buy Lucky Eggs, which increase the experience you get for half an hour, and storage upgrades for your pack and your Pokémon.

Gyms are another staple of Pokémon GO. Like PokéStops, they’re scattered throughout the world in abundance. They’re usually focused on public gathering places. For example, my hometown has gyms at the rodeo grounds, a church, the library, and a popular restaurant – and those are just the gyms I can see from my apartment. Gyms are gray by default, until somebody claims them for their team. There are currently three teams in Pokémon GO: Team Valor, Team Mystic and Team Instinct. These teams are represented by the colors red, blue and yellow, respectively. 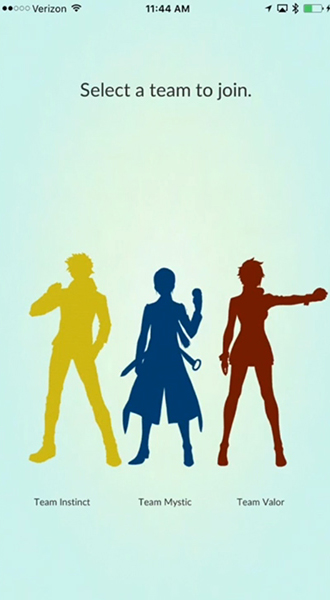 You can use gyms controlled by your team to train – which not only gives you experience, but doing so also raises that gym’s Prestige level. Prestige is a score assigned to a gym that indicates how hard it will be for an opposing team to take it over. Once the Prestige in a gym reaches zero, it becomes unclaimed, open for other teams to come in and take over. Training at and challenging gyms is the only place in Pokémon GO that battling appears. You send out your Pokémon against any Pokémon guarding the gym and do battle by rapidly tapping in order to make your Pokémon attack. There are ways to use stronger attacks; once the blue meter under your Pokémon’s health has a block full, you can hold the screen in order to initiate a stronger attack. However, in my experience, using these stronger attacks just leaves your Pokémon vulnerable to taking lots of damage fairly quickly. You’re also able to swipe left and right, allowing your Pokémon to dodge incoming attacks. This proves fairly effective, provided you can get the timing down.

Battling is perhaps the biggest letdown of Pokémon GO. The battle options are limited at the moment, and gym battles are by far the glitchiest part of the game right now. Last night, I was taking down a gym owned by Team Instinct, but once I had knocked out the opposing Kabuto, the battle wouldn’t end, instead condemning me to attack the fainted Kabuto endlessly, until I force quit the game and restarted. Pokémon GO is going to be much more viable and will keep people playing if it can provide us ways to battle each other (PvP style) – and iron out all the bugs at the same time. 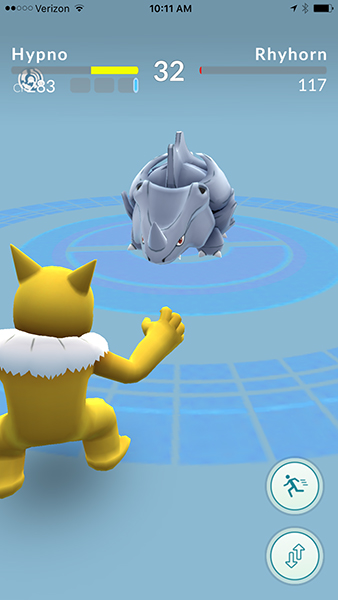 Other huge challenges for Pokémon GO right now are the continuing the server issues. Trainers around the globe have been unable to log into the game with regularity. Players are feeling cheated, finding great Pokémon, only to have the game crash from server stress as soon as they catch them. I, personally, have felt the most bugged when I’ve used a hard-earned Incense, only to have the game crash ten minutes into the half hour of Pokémon attraction. More negative feelings towards server issues are due to the lack of communication on the parts of Niantic and The Pokémon Company regarding the downtime. Players in Australia and New Zealand were left in the dark when the servers were down for hours yesterday, with no word from either company. We’ve moved on from being left in the dark to having the server issues acknowledged, but it isn’t much better. What I would like see is a blog post, explaining the situation and what is being done to fix it. 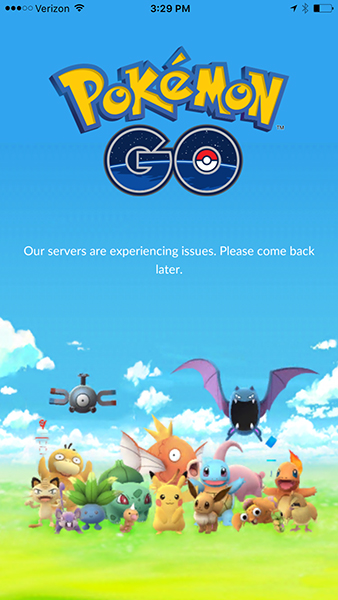 In the end, despite the bugs and trouble, Pokémon GO is a truly fun experience. It could be a dream come true for Pokémon fans… with some patience. A the moment, it feels more like a dream where you’re trudging through water each time you try to run. Worry not though; I believe everything we’ve been waiting for is in sight and that we should remain hopeful. Now that Pokémon GO is out in the wild, it’s only going to get better from here on out.