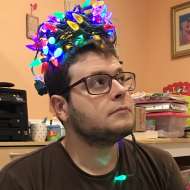 Marcus Ramirez
A writer and dreamer who loves all things tropical, bright, colorful, and shiny. Marcus is obsessed with Kingdom Hearts and patiently awaits its triumphant return to Nintendo hardware. He has a (totally real) court order that requires him to always have a 3DS or Switch on his person when leaving the house for more than a few hours.
This user account status is Approved
About About
Posts Posts
Comments Comments
Collection Collection
Forums Forums

Marcus is a writer and dreamer who grew up, but forgot to stop playing pretend. Living just outside of Miami, Florida, he works as a sales rep to feed his body while writing and gaming to feed his passions. Don’t talk to him until he’s had his dose of Animal Crossing in the morning.

In the late '90s, Marcus’ whole world changed when he was given his first Game Boy. From that day forward, gaming would grow from a simple hobby to a lifelong passion. The games that sealed the deal for him were Kirby’s Dream Land (Kirby is his son, by the way) and Donkey Kong Land. He grew up playing Game Boy with his older sister constantly, and helped raise his younger sister (his Padawan) to surpass him in every way.

If you mention Kingdom Hearts around him, you’d better be ready to have your ear talked off! And if you’re looking for him, you can find him with his apprentice mercilessly tearing up the Turf-War scene, leaving the Koopa-Kids in their dust on the track, or swimming off the shores of their islands. He cries way too much over the Seasalt Trio… Just saying.