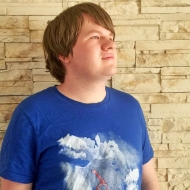 Ben Fruzzetti
Gamer, writer and devourer of pasta. Whenever not letting his daydreams run out of control, he can be found writing for Nintendo Wire, playing old JRPGs, or reading sci-fi and fantasy novels and comics.
This user account status is Approved
About About
Posts Posts
Comments Comments
Collection Collection
Forums Forums

Ben is a writer, gamer and student from Reno, Nevada.

Ben has always enjoyed creative projects and endeavors, and he's had a big imagination since he was a wee tyke. Growing up in dusty, dull Reno, Ben spent a lot of time mulling over what to do with himself, and eventually settled on using his creative engines to be a writer. Studying English and creative writing at the University of Washington, he writes for fun in the hopes of being an accomplished novelist someday.

From his literal earliest memory-- receiving his copy of Pokémon Yellow from his older sister-- Ben has been an avid Nintendo fan, owning every console since the Game Boy Color and Nintendo 64. He most fondly remembers staying up for the midnight release of Super Smash Bros. Brawl, waiting six months for a Wii, and watching his older siblings play classic GameCube games when he was too young to beat them himself. His favorite series include The Legend of Zelda, Fire Emblem, Xenoblade Chronicles, and Earthbound/Mother, the last of which is both his all time favorite game and all-time favorite franchise, across any medium.